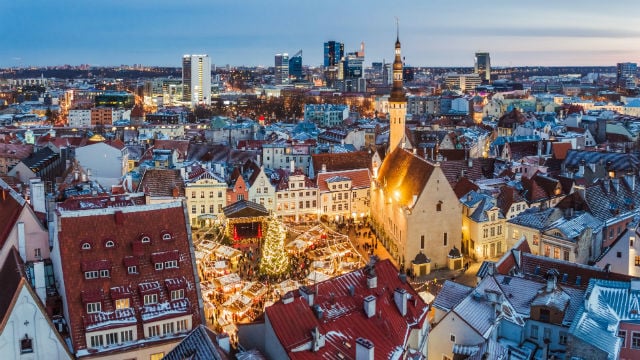 Let’s take a look at ten things that you probably didn’t know about this country of some 1.3 million people with well over 2,000 islands and the most startups per capita in Europe. Without cheating, can you place Estonia on a map? Don’t worry, you aren’t being graded so we’ll help you out. The nation is just south of Finland and is bordered by Russia to the east and Latvia to the south. To the west is the Baltic Sea that separates it from Scandinavia.

The nation’s largest airport is in the capital city of Tallinn, where you can hop on a flight to any of 27 different destinations, the vast majority of which are major European cities. It was declared the best small airport in all of Europe by Airport Council International and business is absolutely booming.

It’s the most digitally-advanced society in the world

While you might have assumed that the chip-implanting Swedes, the always-connected Danes or even those digital radio pioneers in Norway would lay claim to this title, Wired magazine gives it to Estonia.

This is because nearly everything can be done online in Estonia, from voting to registering births and deaths. Estonians conduct 99 percent of their government interactions online, which is incredibly easy to do on the go when nearly all of the country’s public spaces offer free wifi. In 2016, Barack Obama said: ‘I should have called the Estonians when we were setting up our health care website.’

It’s the IT hub of the Nordics Yes, yes, we’ve addressed that it’s not technically in the Nordics but if you work in IT and want to advance your career, Estonia is the place to be. It has the most startups in Europe per capita and its workplaces’ lack of organizational hierarchy makes it easy to reach your career goals as fast as your talent and ambition will take you.

Be warned though, you’ll have some competition. Estonians have long embraced and understood technology. They created the software behind Skype and Kazaa, two global companies that absolutely revolutionized communications and peer-to-peer sharing. TransferWise, which changed the way the world does international money transfers, was also developed in Estonia, as was the cloud-based startup GrabCAD, which allows engineers to manage and share CAD files and build products faster.

Then there’s Estonia’s innovative e-Residency programme, a first-of-its-kind scheme that allows entrepreneurs, freelancers and digital nomads to start and register a company online from anywhere in the world with the backing and support of the Estonian state.

It has Scandinavian-style parental leave

The Nordics may be the countries most synonymous with generous parental leave schemes, but Estonia is truly one of the best places in the world for new parents.

Embracing the work-life balance of its Nordic neighbours, Estonia offers seven different kinds of parental leave that total as much as 87 weeks off. Women are entitled to 140 days of pregnancy and maternity leave while new fathers are given two weeks off prior to birth and then two months of paid leave after the new bundle of joy arrives. On top of that, parents are then given an additional 435 days (not a typo!) off to share until the child turns three. Even adoptive parents are given 70 paid days off.

Find out more about the business environment in Estonia

You’d be hard-pressed to find a tech hub with lower living costs than Tallinn. Salaries in the tech sector are competing with global salary levels in the information technology sector and increasing each year while the median rent of a medium-sized apartment is €620 per month. That’s less than a third of what you’d pay in London or Amsterdam and half of what a similar dwelling costs in Copenhagen or Stockholm.

What's more, it has food and drink prices that would make Scandinavians weep with envy. A pint of beer will only set you back €3 ($3.40) and a three-course meal for two at a mid-range restaurant only costs €38 ($43). The country is also home to half of the top 60 restaurants in the Baltic States as determined by The White Guide Nordic 2017 – so one thing's for sure, you won't struggle to find a decent meal! Residents of the Estonian capital were the first in the EU to be treated to free public transport. Since 2013, they’ve been able to hop on the city’s buses, trams, trains and trolleys at no cost (well, OK, they had to spring for a so-called ‘green card’ that cost a whopping two euros). Tallinn’s free transport was an experiment that caught the attention of urban planners the world over, and it’s worked. In fact, it’s been so successful that the Estonian government decided to take it national.

Find out more about working in Estonia

Taxes are a lot lower than in the Nordics Estonians may feel Nordic, but they don’t get taxed like Nordic people.

Estonia has a 20 percent income tax, which is not only well below the rate of the Nordic countries but also much simpler than the progressive tax scales favoured there. In Estonia, everyone pays the same tax rate regardless of their income level. Businesses too can benefit from lower taxes with a 0 percent corporate income tax on retained and reinvested profit.

VAT is also lower in Estonia than in the Nordics, at 20 percent for most goods and services and a reduced rate of 9 percent for certain products like books.

The people of Estonia enjoy a great work/life balance…

Workers in Estonia receive 28 days of paid vacation and an additional ten public holidays per year, leaving plenty of time to enjoy the country’s beautiful nature. And there is no shortage of that. A full 50 percent of Estonia is forest land and there are nearly 3,800 kilometres of coastline to explore. If you fancy yourself more of an urban explorer, you’ll find plenty to your liking in the heart of Tallinn. The city’s Old Town is such an “exceptionally complete and well-preserved” medieval city” that it’s been declared a UNESCO World Heritage Site. The city’s juxtaposition of the ancient and the modern lends itself to a number of postcard-worthy sites to visit during all of that time off work!

Estonians are so proud of their country’s working environment as frontrunners in technology that the country has launched its ‘Career Hunt’ promotion. The top 23 applicants from 15 countries are invited to spend an all-inclusive five day trip to Tallinn where they will meet the country's brightest IT stars, enjoy the sauna culture and skip the queue straight to final rounds of job interviews with top tech companies. Temperatures reach between 20 and 30 degrees in summer but Estonia can be downright frigid during the winter months. It’s not unusual for temperatures to drop down to -20C but, like their Nordic neighbours, the locals hardly let that stand in the way of a good time. Estonians really embrace the winter through a thriving sauna culture and outdoor activities like husky sledding and ice skating on some of the country’s 1,400-plus lakes. The thick blanket of snow also adds a whole new element to Estonia’s natural and manmade beauty, giving you another reason to go out exploring. After all, you’ll probably have some remaining days off and extra money in your pocket.

This article was produced by The Local Creative Studio and sponsored by Work in Estonia. 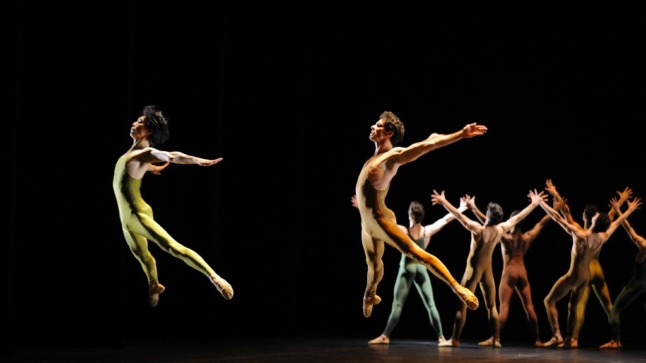 Bejart Ballet dancers perform at Igor Stravinsky's "The Rite of Spring" in the Bolshoi Theatre in Moscow, on April 3, 2013. credit: YURI KADOBNOV / AFP

The company, founded by the late legendary French choreographer Maurice Bejart, was placed under audit on June 4 over allegations touching on its “working environment and inappropriate behaviour”.

The Maurice Bejart Foundation announced the audit just a week after revealing that the affiliated Rudra Bejart ballet school had fired its
director and stage manager and suspended all classes for a year due to “serious shortcomings” in management.

While the foundation has revealed few details of the allegations facing the two institutions, anonymous testimonies gathered by trade union
representatives and the media paint a bleak picture.

Swiss public broadcaster RTS reported that a number of unidentified former members of the Bejart Ballet Lausanne (BBL) company had written to the foundation, describing the “omnipresence of drugs, nepotism, as well as psychological and sexual harassment”.

Many of the accusations allegedly focus on Gil Roman, who took the helm of BBL when its founder died in 2007.

Roman did not respond to AFP requests to the foundation or BBL seeking comment.

The French choreographer faced similar allegations during a secret audit a year later, but was permitted to stay on and continue as before, according to RTS and the union representing the dancers.

“We cannot understand what might have been in that audit that would have allowed them to clear him completely,” Anne Papilloud, head of the SSRS union that represents stage performers in the French-speaking part of Switzerland, told AFP.

“The accusations back then were word-for-word the same as today: harassment, denigration, humiliation, insults, temper tantrums, drugs,” she said, citing former company members who had contacted the union in recent weeks and had said they were around during the 2008 audit.

One dancer told RTS on condition of anonymity that it was common for Roman to publicly humiliate dancers who made a misstep, while another said he often asked dancers to bring him marijuana.

“Drugs were part of everyday life at Bejart Ballet,” the broadcaster reported her saying.

Papilloud meanwhile told AFP that the “vast majority of the testimonies I have heard have been about psychological harassment”.

Drug-use had been mentioned, mainly linked to how the drugs “provoked outbursts of anger”, she said.

She said she had also heard a small number of complaints about sexual harassment, although not involving Roman.

But what stood out most in the dozens of accounts she had heard in recent weeks was the sheer “terror” people described.

Their reaction to what they had been through was “extremely strong”, she said, “almost at the level of post-traumatic stress”.

Papilloud said that as a union representative she had long been aware that BBL was considered a difficult place to work, with low pay compared to the industry standard and little respect for working hours.

But the recent revelations of “an extremely toxic working environment” had come as a shock, she said.

Over 30 current and former BBL members had contacted the union following the upheaval at the Rudra Bejart ballet school, she said.

The school, which halted classes and fired its long-time director Michel Gascard and stage manager Valerie Lacaze, his wife, was reportedly fraught with psychological abuse and tyrannical over-training.

One student described how she had found herself surrounded by teachers and other students who “humiliated and belittled” her, the president of the foundation’s board, Solange Peters, told RTS.

One teacher present at the time reportedly compared the scene to a “lynching”.

The revelations about the school appeared to have “opened a Pandora’s Box”, spurring alleged victims of similar abuse at BBL to come forward, according to Papilloud.

“We have really been inundated,” she said, adding that many hope that “this time, things can change”.

Following close communication with the foundation, the union too is hopeful that the current audit will be handled differently than the last one, with more openness and independence, Papilloud said.

“I think this will not be an audit where things are swept under the carpet.”