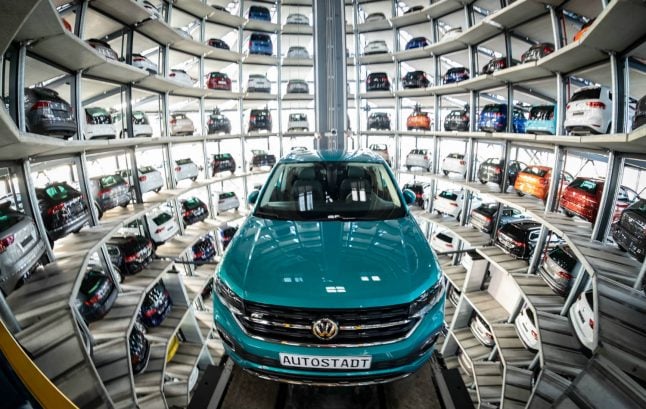 The Volkswagen T-Cross model in a car tower in the Volkswagen premises in Wolfsburg, Lower Saxony. Photo: DPA

The carmaker, which last month announced a €44 billion electric offensive by 2023, said it would phase out its diesel and petrol cars as it looks to meet the emissions targets of the 2015 Paris climate deal by 2050.

Michael Jost, Volkswagen's strategy chief, told an industry conference on Tuesday that the firm's employees were working on “the last platform for vehicles that aren't CO2 neutral”.

“We're gradually fading out combustion engines to the absolute minimum,” he said at the conference near the company's headquarters in Wolfsburg, Germany.

The group, whose brands range from luxury Porsche and Audi to the budget-conscious Skoda and Seat, has set itself the ambitious target of offering more than 50 electric models by 2025, up from six today.

Jost said that last generation of vehicles would begin to roll out in 2026 and predicted that the last vehicle with a combustion engine would be sold around 2040, according to the German newspaper Handelsblatt, whose car conference he spoke at.

In November's announcement the group said its “electric offensive” would focus on electric, self-driving and connected cars as well as mobility services like car sharing.

The move underscores just how serious the automaker is about closing the gap with Asian competitors and US tech giant Tesla who have had a head start in the e-car race.

Volkswagen's pivot towards e-cars has in part been spurred by efforts to shake off its ongoing “dieselgate” scandal.

The group was forced to admit in 2015 that it had installed cheating software in 11 million diesel vehicles designed to dupe pollution tests.

Suspicions of trickery later spread to other carmakers too, badly hurting the industry's reputation.

The saga also fuelled a backlash against diesel, with a string of German cities now facing driving bans for the oldest, most polluting diesel cars.

Faced with increasingly angry drivers, the German government has come under pressure to avoid the bans but its efforts to get carmakers to commit to cleaning up engines have had limited success.

The “dieselgate” fallout has so far cost VW more than 28 billion euros in fines, buybacks and compensation and the company remains mired in legal woes around the world.