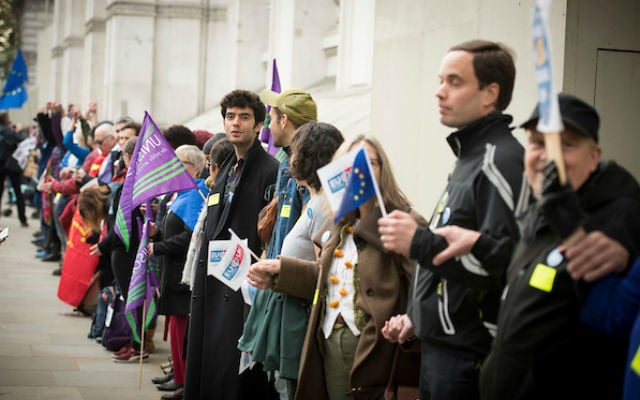 “I am absolutely convinced there will be a deal on citizenship rights” Nicolas Hatton, the French chair of the3million group and a UK resident of over 20 years, told The Local. “It just won’t be this one,” he adds.

Hatton suggests that the rights of citizens caught on the front lines of Brexit, Brits in the EU and EU citizens in the UK, could have been excluded from the negotiations. “It should not have been a political debate,” says Hatton.

Groups like the3million and British in Europe have argued that the rights of millions of Brits living in the EU and EU citizens in the UK, a total of  approximately five million people, have been used as bargaining chips in the negotiations.

“We want to retain the same rights, deal or no deal. If there’s no deal, we want a ring-fenced solution,” adds Hatton. A recent twitter feed by the3million outlines how the rights of EU citizens in the UK will chance with Brexit.

1/ #citizensrights Fact Check:
Vote Leave promised EU citizens that they will be treated no less favourably than they are at present.

Now that we have a #BrexitDeal with the EU in form of the Withdrawal Agreement (WA) it is time to check whether Vote Leave told the truth. pic.twitter.com/borxZRglu8

The largest community of EU citizens in the UK is in London, just over 1.2 million people. Roughly 1.3 million EU citizens live in South East, the East of England, the West Midlands and East Midlands. Poland, Romania, the Republic of Ireland, Italy and Portugal respectively represent the top five countries of origin of EU citizens, according to data from Britain’s Office of National Statistics (ONS).

The proposed Withdrawal Agreement affords anyone who can prove five years of residency in the UK the right to settled status, which in turn entitles EU citizens to permanent residency. But the criteria to apply for settled status could still be a huge challenge for the most vulnerable groups among EU citizens, argues Hatton.

The Roma community in the UK, for example, speak seven European languages and are of pan-European background, in terms of state of origin. Hatton says the3million is planning 20 events from now until March 2019 to help these communities understand what Brexit expects of them if they are to remain in the UK.

“Many don’t know about settled status and don’t follow Brexit,” Hatton told The Local, clarifying why his group is focusing on some of the most vulnerable among the estimated three million EU citizens living in the UK. “The point of our work is to make sure everyone is protected on the list.”

There are no figures for the exact numbers of people of Roma descent in the UK, although Hatton estimates that it is “hundreds of thousands.” To add to the difficulties of outreach programs designed to offer support, many of the adults in the Roma community don’t speak English.

According to the Withdrawal Agreement recently agreed by the UK and the EU, European Union citizens in the UK will have to apply for settled status, which involves demonstrating residency through the right paperwork via an online portal to the UK Home Office.

Besides communities like the Roma, who are often insulated from mainstream media exposure and therefore lack the right information, victims of domestic violence are at risk of not meeting the paperwork criteria to acquire settled status.

“Many victims of domestic violence fled their homeland, may have been in the UK for longer than five years but often have no paperwork to prove it,” notes Hatton.

There are less obvious cases of demographics who could struggle to acquire settled status too. Approximately 100,000 Polish nationals in the UK apparently have an expired ID card, which means their paperwork could not be accepted by the UK’s Home Office.

EU citizens who have been sectioned under the Psychiatric Act, for example, are not able to make an application themselves. The list of vulnerable groups goes on.

And it isn’t just EU citizens in the UK who could struggle to fulfill the terms of residence envisioned by the Withdrawal Agreement.

Dr. Michela Benson, a researcher at the UK’s Goldsmiths University and the Brexit Brits Abroad group, warns that any post-Brexit residency procedures based on registration alone will punish the most precarious in Britain’s EU community too, such as young itinerant workers or seasonal staff.

“Young people are moving regularly across nation states in search of temporary work in the contemporary globalised market,” Dr Benson told The Local. The loss of onward movement for British citizens, who may only retain their EU rights in one host country after Brexit, will mean “seasonal workers will be hit hard,” adds Benson. “Younger, itinerant people will find themselves not covered.”

The official registered number of Brits in each EU country (correct as of January 2018). Photo: The Local.

Hatton is scathing of how both the EU and UK negotiating parties have treated the joint campaigns of the3million and British in Europe, the grassroots campaign for Brits in Europe.

In November this year, the3million and British in Europe delivered a letter to 10 Downing Street calling for citizenship rights to be ring-fenced. “We are calling for the EU and the UK to honour under Article 50, as a minimum, the agreement already reached on citizens’ rights – whatever the outcome of Brexit,” states that letter. That letter was part of The Last Mile campaign, which involved a human chain from parliament to Downing Street and cross-party interventions by UK politicians in parliament in favour of ring-fencing of rights.

“When we went to 10 Downing Street, we weren’t greeted by anyone, except Larry the Cat,” recalls Hatton.

The settled status scheme has only been trialled with 700 people so far, although up to 5,000 cases could have to be processed by the UK Home Office each day, according to the3million.

Not since ID cards were abolished in 1952 has the Home Office faced a bigger challenge than processing the applications of the 3.6m EU citizens. 5,000 per day, 7 days a week. We will be monitoring the Home Office very closely.

As the UK vote on the draft Brexit deal approaches, Hatton says the current deal is nevertheless better than no deal. Although deal or no deal, EU citizens in the UK now feel less welcome than they did in the past, he says.

“The rise in hate crimes has been particularly shocking,” Hatton told The Local. “The atmosphere is strange. You see it everywhere. EU citizens are more careful now of speaking their own language.”

According to mood surveys conducted by the3million, only one in three EU citizens in the UK intends to stay regardless of the outcome of Brexit. The rest are apparently taking a ‘wait and see’ attitude.