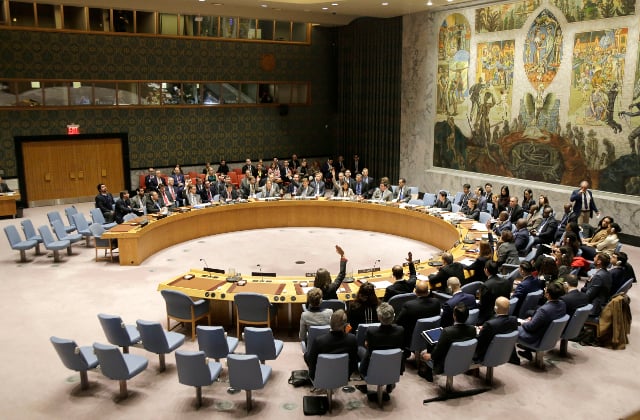 Britain presented the measure last week as the United Nations stepped up its diplomatic efforts to hold talks on ending the war in Yemen.

UN envoy Martin Griffiths is hoping to bring the Saudi-backed government and the Huthi rebels to Sweden for negotiations that could begin as early as December 3rd, according to UN diplomats.

During UN negotiations on the British-drafted text, the US mission to the United Nations said “it will be important to take into account the results of the imminent talks in Stockholm which will be a key inflection point in the political process”, according to an email message seen by AFP.

“We look forward to offering more substantive comments to the draft once we have more information on the outcomes of the upcoming consultations,” said the US mission in the message sent on Tuesday to other council members.

The proposed resolution – the first to be discussed by the council on Yemen since 2015 – would significantly ratchet up pressure on the Saudi-led coalition and the Iran-aligned Huthis to seek a negotiated settlement.

The draft resolution calls for an immediate truce in the port city of Hodeida, the main entry point for humanitarian aid and supplies to Yemen, and sets a two-week deadline for the warring sides to remove all barriers to humanitarian aid.

Negotiations on the draft began last week and no vote has been scheduled at the Security Council.

The United States, which has supported the coalition, last month made a surprise call for a ceasefire and threw its weight behind the UN-led effort to hold peace talks.

The war has left millions on the brink of starvation and unleashed what the United Nations has described as the world’s worst humanitarian crisis.

Despite global outrage, President Donald Trump last week vowed to stick by Saudi Arabia, throwing a spanner in the works at the United Nations during negotiations on the Yemen draft.

UN diplomats said they did not expect a vote this week on the measure due to the US reluctance to push the coalition.

The draft resolution calls for a large injection of foreign currency into the economy through the central bank to support the collapsing currency and for salaries of civil servants, teachers and health workers to be paid within one month.

Saudi Crown Prince Mohammed bin Salman, who is facing international criticism over the Khashoggi murder and the devastating war in Yemen, is due to join world leaders at the G20 summit in Argentina later this week.