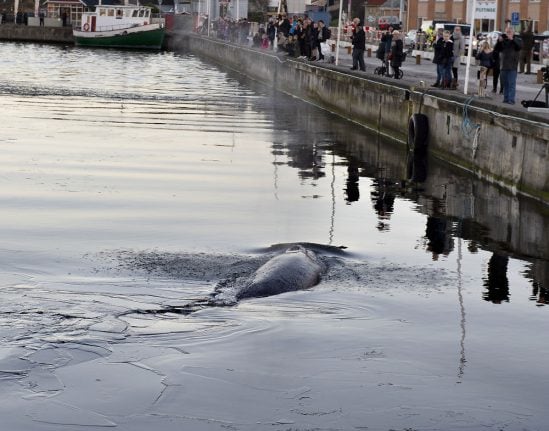 The whale swimming in the harbour in Hobro. Photo: Henning Bagger/Ritzau Scanpix

The whale became stuck near the marina at Hobro, where the water is just 1.5 metres deep, broadcaster DR reports.

After the whale stranded near the wharf, three passers-by jumped into the freezing November water to help free the aquatic mammal.

One of the three, 23-year-old Daniel Kristensen, spoke to DR after assisting the animal.

“There were a lot of people standing and watching and one person had jumped in, so it was a matter of helping out,” Kristensen said.

The 23-year-old was still shivering as he spoke to DR’s reporter, the broadcaster writes.

“You just have to do something. People were just watching and letting it die, and that’s a life being taken from the whale,” he said.

Ivar Høst, a local consultant with the Danish Nature Agency, told DR that the animal was most likely a northern minke whale, a common variety of baleen whale.

Around 156,000 such whales are estimated to be distributed across the North Atlantic region, but they are not normally found in Danish waters.

Tuesday’s rescue action is unfortunately unlikely to save the whale, according to Høst.

“It was a touching effort, but I very much doubt whether it will help in the long term,” he told DR.

“There is probably a reason why it got so far in, and that’s because it’s sick,” he said.

“We know from previous experiences that when we try to help whales get free, they often come back within a couple of days. We don’t know why, but they have a tendency to head towards land when they are sick,” he said.

The whale was swimming in the harbour area but was no longer stuck to the bottom, DR reported just before 4pm on Tuesday.