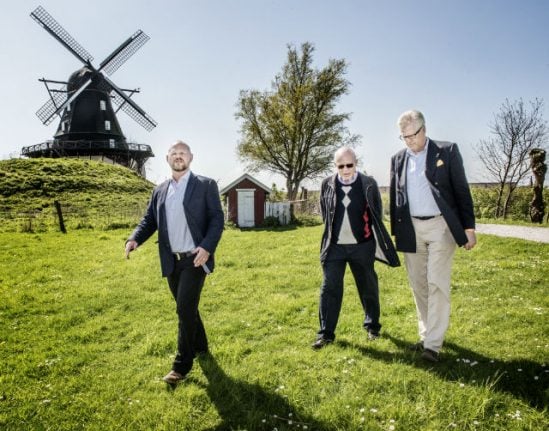 Patrik Selimson (left) will be the new mayor in Burlöv after doing a deal with the Sweden Democrats. Photo: Johan Nilsson/TT
Two months on from September’s election, the centre-right party is emerging as the big winner in southern Sweden, controlling 18 municipalities in Skåne compared to just eight before the election, and ousting the Social Democrats from power in the regional assembly.
But this has come on the back of big wins for the anti-immigration Sweden Democrats (SD) rather than as a result of the Moderates’ own lacklustre performance. The Moderate Party's share of the municipal vote only inched up from 22.7 percent in the 2014 election to 22.9 percent in September.
“It’s just that the Alliance have teamed up with the Sweden Democrats,” Kent Wollmér, the ousted Social Democrat mayor of Burlöv, complained to The Local. “It’s Sweden Democrat votes that they’re ruling with. We’re actually bigger than they are.”
The Social Democrats had controlled Burlöv, a Malmö suburb, ever since working men in Sweden got the vote in 1911, so the new Moderate rule marks a historic shift.
But it's not alone. If the Moderate Party in Trelleborg hadn’t done a deal to make the local SD leader the second vice chairman of the city council, they would not have been able to take over from the Social Democrats.
The same goes for Kristianstad, Skurup, and Simrishamn, each of which the Moderates seized from the Social Democrats with SD help.
Elsewhere, the Moderates have kept their hold on power by teaming up with the anti-immigration party.
In Staffanstorp, outside Malmö, the party ended its alliance with the Liberal and Centre Party and instead formed a coalition government with SD.
READ ALSO: Swedish Moderate-led council to ban halal meat in deal with populists
In Helsingborg, the Moderates lost the majority they had with their Alliance partners but hung on to power with SD support.
One of the most dramatic images of September's election result was the Skåne result map, which showed the county swathed in yellow, as SD emerged as the biggest party across the country's rural centre.

But the populists have so far been able to turn these gains into power in two municipalities, Hörby and Bromölla, with the Moderate party backing them to seize power from the Social Democrats in both.
READ ALSO: First Sweden Democrat mayor resigns over old social media posts
There is only one municipality, Klippan, where the Moderates have instead looked to the left and formed a grand coalition with the Social Democrats, thereby keeping SD out of power despite being the municipality's biggest party.
Wollmér said that he was most surprised that Skåne representatives of the Centre and Liberal parties had been willing to form ruling coalitions in so many municipalities with SD support, despite their parties’ strong opposition to negotiations with the populist party at a national level.
Many of those who voted for SD did not understand their origins in the neo-Nazi movement, he argued.
“They have their origins in Nazism, you can’t get away from that,” he said. “But out in the country, many of the people who vote for SD are people who are dissatisfied. They don’t really know what SD actually stands for.”