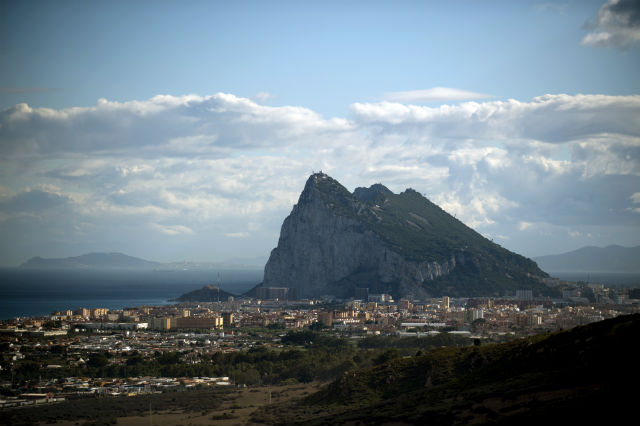 The border between Gibraltar and Spain is still a sticking point. Photo: Jorge Guerrero/AFP
Britain's Prime Minister Theresa May and leaders of the other 27 EU member states are to meet Sunday to approve their divorce agreement and set a course for negotiating their future post-Brexit relationship.
But Spanish officials emerged from talks on Friday warning that Prime Minister Pedro Sanchez might not attend if London does not put in writing a promise that no future accord on EU relations involving Gibraltar will be signed without Madrid's specific assent.
“We have demanded that it be published by the British authorities before the European Council on Sunday,” Luis Marco Aguiriano Nalda, state secretary for European affairs, told reporters in Brussels.
Both British and EU negotiators said that the withdrawal agreement itself would not change at this stage, but in London a spokesman for Number 10 had earlier said: “We will work with the governments of Gibraltar and Spain on our future relationship.”
It was not immediately clear if this promise would be enough to shift the logjam. In legal terms, Spain's disapproval would not halt the divorce settlement, but would embarrass EU leaders keen to show that the 27 remain
united despite Brexit tensions.
And, as Aguiriano noted, any final relationship negotiated between London and Brussels after Brexit day on March 29 would eventually have to be approved by all remaining member states — giving Spain a de facto veto further down the line.
May is due in Brussels on Saturday to see EU Commission president Jean-Claude Juncker, but diplomats told AFP that no more substantive negotiations would take place and that Sunday's summit would simply see
leaders sign off on the fruit of 17 months of dialogue.
A European diplomat told AFP that Gibraltar had been the sole remaining bone of contention in the meeting of so-called “diplomatic sherpas” — who guide their national leaders to the summit.
But he said that when the minutes of Sunday's meeting are read out they will include language stressing the importance of Britain maintaining a level-playing field in trade rules during the post-Brexit transition and on
fishing rights.
And the summit would make it clear that the European Council, which represents member states, would take the lead over the Commission in negotiating future ties — another measure that will ensure Madrid that its voice will be heard before any final settlement is reached.
Parliamentary challenge
After that, May will have to sell the deal to the British Parliament, an even greater political challenge.
May refused to say whether she would resign if parliament eventually votes down the legal divorce agreement that the EU is set to endorse on Sunday, alongside a shorter political framework to guide talks on future ties.
“This isn't about me… I am focused on ensuring we get this deal,” she said during a call-in show on BBC radio, adding that she would be touring “up and down” Britain to explain the agreement.
“If this deal does not go through, we are back at square one. What we end up with is more division and more uncertainty,” she said.
May, who voted to stay in Europe in the 2016 referendum, also dismissed calls for a second vote — but then refused to say whether her deal was preferable to remaining in the bloc.
Instead, she said Britain could build a “better future” for itself outside the European Union.