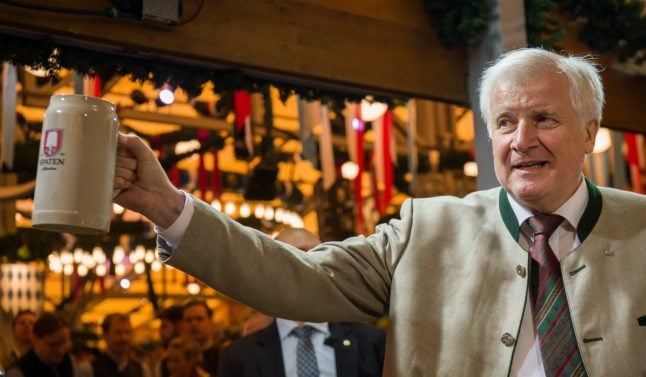 Horst Seehofer raises a drink at Oktoberfest 2017. Photo: DPA
Seehofer said he plans to resign as the Christian Socialists (CSU) leader on January 19th, the same day a new head of the party will be elected at a party conference.
The 69-year-old did not mention his future as Interior Minister in his statement.
Seehofer said that 2019 would be “the year of renewal for the CSU”. The CSU is the sister party of the CDU, currently led by Angela Merkel until she steps down as party head next month, and only exists in the southern German state of Bavaria.
“I will therefore invite you to a special CSU party conference on 19th January 2019, with the election of a new party leader,” Seehofer continued in his statement.
“At this time I will make my office as party leader available. At the special party conference, the party base will have ample opportunity to discuss how the CSU can regain more confidence among the population.
“In preparation for the special party conference, a CSU executive meeting will be held on December 17th, 2018.”
SEE ALSO: Another shake up for German politics as Horst Seehofer set to step down as CSU leader
Known for standing up for Bavarian values, joining in during the region's world-renowned traditional celebration, Oktoberfest, and taking a hard line on immigration, Seehofer had been elected CSU leader for the first time in 2008. From 2008 to March 2018, he was also the Bavarian Minister President.
But following party pressure, he then had to hand over this post to Markus Söder. He remained head of the CSU – and at the same time became the new Federal Minister of the Interior.
With his planned resignation, Seehofer is bowing to massive pressure from his party following dismal election results in the Bavaria state elections in mid-October.
SEE ALSO: The winners and losers: 7 things you need to know about the Bavaria election
Seehofer had already announced to his colleagues that he was to step down at a CSU leadership meeting on Sunday, but he left the date open.
At the gathering, the CSU district chairmen and women had made it clear that the party base wanted a fresh start.
On Monday Seehofer confirmed to the press that he would step down as party head but said he would remain Interior Minister. He did not give any indication of how long he would stay in his Interior Ministry post. The current term ends in in 2021.
Current Minister President Söder and Manfred Weber, Member of the European Parliament, are considered possible candidates for the top CSU spot.

Seehofer has served his party for more than 40 years. He joined the CSU in 1971 and entered the Bundestag in 1980.