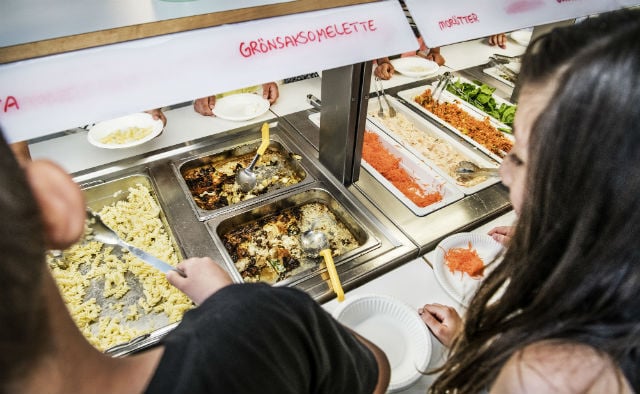 File photo of a school canteen. Photo: Tomas Oneborg/SvD/TT
The three-year action plan for the town of Staffanstorp outside Malmö, published on Tuesday, betrays the strong influence of the Sweden Democrats, and is likely to be used as ammunition by Moderate party members who oppose cooperation with the populist party on a national level.
“Special cultural demands should not exist in the municipality's operations, for example separate bathing times and such like,” reads the plan, signed by the local leaders of.the Moderate and Sweden Democrats.
“The municipality's operations should also be free from expressions of religion, for example ritually slaughtered meat.”
Sonesson downplayed the symbolic significance of the ban, presenting the policy as a question of simple municipality economics.
“Every day we supply lots of public lunches, and for those with medical needs, we prepare special meals for them, but we feel we can't supply every demand for religious beliefs,” he told The Local.
“You have a big majority that doesn't necessarily want to eat halal meat. We believe that a small minority can't put this demand on the majority.”
When asked whether being “free from religious expressions” would mean the municipality would not provide funding for Christmas events or the Feast of Saint Lucia, Sonesson said they would not be affected.
“No we will not stop Lucia or Christmas events,” Sonesson wrote in an email, explaining that they were excluded because they were “deeply rooted”.
Christian Sonesson leads the Moderate Party in Staffanstorp's municipal government. Photo: Moderate Party
But the proposal comes as part of the action plan's section on Labour, Welfare, and Integration, in which the parties also pledge to ban separate bathing times for women, to overturn a law which forces municipalities offer housing to refugees, and to ban begging.
“It's a very populist programme,” said Björn Magnusson, group leader of the centre-right Liberal Party. And it has to do with the fact that the local Moderates in Staffanstorp, they have more or less the same ideology as the Sweden Democrats.”
He pointed out that the local swimming pool did not offer gender-segregated bathing anyway, and neither did local schools and old people's homes serve halal meat, with strict Muslims expected to simply choose the vegetarian option.
“It's ridiculous. Several of those questions aren't even an issue in our community. It's just a populist agenda to put the Sweden Democrats in a good mood,” he said.
He said that during the election campaign, the local Moderates had proposed a local ban on the Muslim call to prayer, despite the fact that the town does not have a mosque.
The programme announced on Tuesday also included plans to impose a “duty to integrate” on new immigrants who do come to the municipality, and to start making unannounced home visits on those receiving benefits.