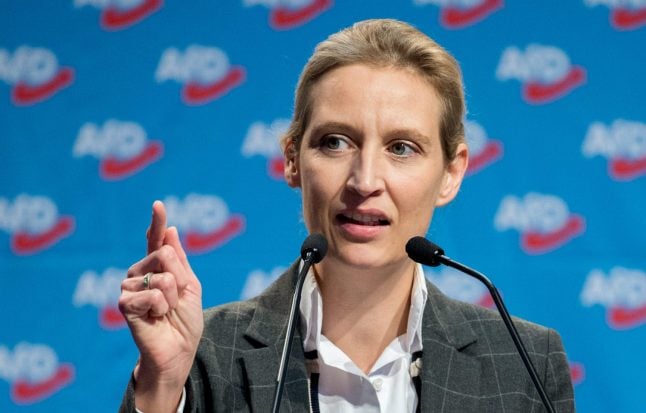 The prosecutor's office of Lake Constance said it had made the request in a letter to Bundestag president Wolfgang Schäuble.

The move is necessary to allow prosecutors to open an official probe into the dubious payments, they said in a statement.

Weidel heads the Alternative for Germany's (AfD's) parliamentary group and has long been seen as a rising star in the anti-immigrant, anti-Islam party.

But she has come under increasing pressure since German media revealed last weekend that the AfD's Lake Constance branch received 18 donations from a Swiss pharmaceutical firm, PWS, between July and September 2017, totalling
some 150,000 Swiss francs (€130,000 euros).

Under German law, campaign donations from non-EU countries are illegal. Switzerland, though linked to the EU through numerous treaties, is not a member of the bloc.

Lake Constance is the southern district where Weidel, who divides her time between Germany and Switzerland, where her partner and children live, ran for office in 2017 elections in which the AfD made huge gains.

She has insisted she has no information about the campaign donor and stressed that the money was later repaid.

Questions have also been raised over a sum of money received from Belgium in February this year. Weidel's district association's account had received €150,000 from the sender “Stichting Identiteit Europa” (European Identity Foundation).

The payment was examined by the party. “However, the AfD district association Bodenseekreis was unable to establish either the donor identity or the donor motivation, which is why it ultimately decided not to accept the money from 'Stichting Identiteit Europa',” the party explained in a press release.

For this reason the group did not report it to the Bundestag, the party said.  “On 9th May 2018 the full amount was remitted to the sender,” they added.

Party donations from EU countries, like Belgium, are not illegal in principle, but donations of more than €50,000 must be reported to the Bundestag administration.

Politicians from other parties have strongly condemned her handling of the affair.

Lawmaker Britta Hasselmann from the opposition Greens has accused Weidel of “playing the public for fools” by claiming she was unaware that foreign donations were illegal.

MP Johannes Kars of the Social Democrats, Chancellor Angela Merkel's junior coalition partner, has said that if the money is confirmed to have violated spending laws then Weidel “should resign”.

The Frankfurter Allgemeine daily on Wednesday reported that Weidel spent some of the Swiss money on social media advertising and on a media lawyer tasked with launching proceedings against journalists.

The German journalists' federation DJV responded by calling on Weidel to step down.

“In the fight against critical journalists the AfD parliamentary leader will use any means, even apparently illegal party donations,” DJV head Frank Überall told the Handelsblatt newspaper.

The Swiss company behind the donations told German media it was acting on behalf of “a business friend” but declined to identify the person.