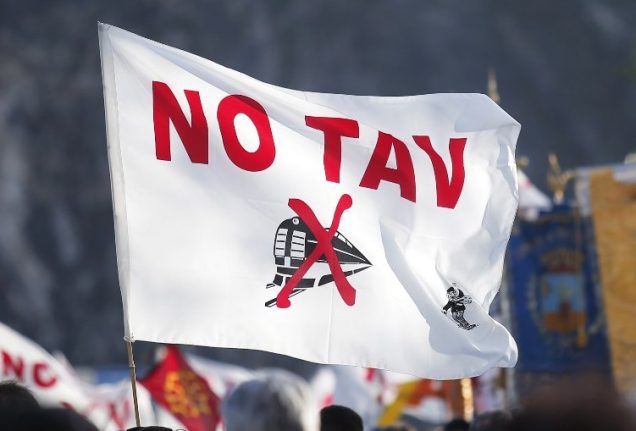 The planned train line has met with protests from locals in Italy and France. Photo: Marco Bertorello/AFP

Business leaders are expected to lead a rally on Saturday urging Rome to forge ahead with the €8.6 billion tunnel through the Alps for the line linking Turin to Lyon, which has already been partially dug.

The rail link will reduce travel time between Milan and Paris from almost seven hours to just over four.

As well as being attacked by environmentalists, the line has been criticised as a misuse of public funds and the anti-establishment Five Stars Movement (M5S) had pledged to block it if elected.

But its government partner, the right-wing League, favours the venture and the movement now fears the so-called TAV ('treno ad alta velocità', or high-speed train) may join the growing list of promises it has been forced to break.

With furious M5S voters burning its flag over other perceived betrayals, analysts have warned a go-ahead on the line could be devastating, particularly for populist leader and deputy prime minister Luigi Di Maio. 'We're all guilty of resisting': some protesters have been jailed for their role in demonstrations against the train line. Photo: Marco Bertorello/AFP

“Italy is the second largest manufacturing country in Europe, and it is in its interest to have large-scale infrastructure,” insists Vincenzo Boccia, head of the industry lobby Confindustria.

Turin's city hall — run by the M5S — voted against the line last week, as protests raged outside. The following day, the Piedmont regional council — where the centre-left has the majority — voted in favour.

Piedmont head Sergio Chiamparino has said he is ready to hold a referendum on the issue to decide once and for all, while supporters of the project are to demonstrate in Turin on Saturday, along with local French politicians.

The contested project is for a 57 kilometres long tunnel between the Susa Valley and Maurienne Valley. Proponents of the line, launched nearly 20 years ago and officially scheduled to be finished in 2025, argue that it will rid the roads of a million trucks and avert some three million tonnes of greenhouse gas emissions each year.

But supporters fear the M5S could get its way should the League believe the coalition's future is at risk over the project.

Paolo Ugge, head of the Conftrasporto transport and logistics confederation, said it was “unacceptable that a strategic piece of infrastructure… could be sacrificed as a bargaining chip”.

Italy's Prime Minister Giuseppe Conte has said a decision on the TAV will be taken after a “cost-benefit analysis”. Opponents say the TAV will damage the environment of the Susa Valley. Photo: Olivier Morin/AFP

The bill for the tunnel is being split 40 percent, 35 percent and 25 percent between the European Union, Italy and France.

French Transport Minister Elisabeth Borne on Monday promised in parliament “the government's determination to build this infrastructure”. Borne said she respected Rome's decision to carry out a new evaluation of the line's social and economic impact, but warned that the clock was ticking for launching tenders for the project.

She will meet her Italian counterpart for talks on Monday.

France's Economy Minister Bruno Le Maire in August said there were “legitimate questions” being asked by the Italian government over its profitability.

The EU is trying to encourage both countries to move forward with a programme that will otherwise leave it out of pocket.

The European Commission's then-coordinator for a trans-European railway network, Jan Brinkhorst, reminded Italy and France in September that the EU had already shelled out €370 million on the project between 2007 and 2013. A further €814 million for the 2014-2020 period has been signed off on, including €120 million already paid.

He warned that scrapping the project could result in the EU demanding its money back, according to European sources.

And in a carrot and stick approach, he suggested there could be more money if the project goes ahead. The Commission has proposed upping its contribution to cross-border projects to 50 percent — potentially bringing the TAV an extra €860 million. Drilling the tunnel beneath the Alps began some ten years ago. Photo: Jean-Pierre Clatot/AFP

The alliance between Italian centre-left parties was left in disarray on Sunday night, potentially meaning a landslide victory for the hard-right coalition at early general elections in September.

The leader of the centrist Azione party withdrew support for the left-wing coalition led by the Democratic Party (PD) just five days after the two joined forces, saying it could not work with left-wingers brought in to boost the alliance.

Carlo Calenda, leader of Azione, withdrew his support on Sunday after PD made another pact with smaller left-wing parties including the radical Sinistra Italiana, and new green party Europa Verde.

“You cannot explain (to voters) that to defend the constitution you make a pact with people you know you will never govern with,” Calenda told newspaper Corriere della Sera.

The news was greeted with jubilation by hard-right League leader Matteo Salvini, who tweeted: “On the left chaos and everyone against everyone!”

Giorgia Meloni, leader of the neofascist Brothers of Italy party (FdI) mocked a “new twist in the soap opera of the centre-left.”

Analyists predict the centre-left split could hand the right-wing bloc a landslide victory at the election on September 25th, with Meloni tipped to become Italy’s first female prime minister.

Italy’s political system favours coalitions, and while Meloni has a strong alliance with Salvini’s League and Silvio Berlusconi’s Forza Italia, Letta is struggling to bring together the disparate  progressive parties.

The PD is neck and neck with Brothers of Italy in the latest opinion polls, but even in partnership with Azione, the group most recently polled at 33.6 percent, compared with 46.4 percent for the right.

Political commentators said the only hope PD has now of posing a credible threat to the right-wing alliance would be by partnering with the Five Star Movement.

However, Letta has repeatedly said this is out of the question, as he blames M5S for triggering the political crisis that brought down Mario Draghi’s broad coalition government.

“Either PD eats its hat and seeks alliance with M5S to defeat the right-wing coalition, or it’s hard to see how the right can possibly lose the forthcoming election,” Dr Daniele Albertazzi, a politics professor at the University of Surrey in England, tweeted on Sunday.

Early elections were called after Draghi resigned in late July. His government currently remains in place in a caretaker role.

TRAIN TRAVEL
‘Something always goes wrong’: What I learned taking the train through Europe with two kids