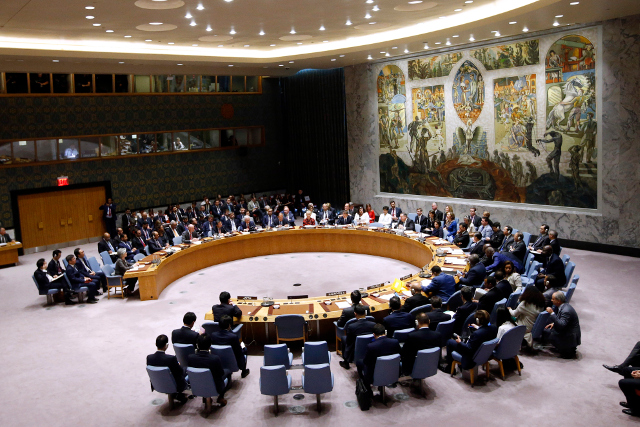 Sweden, the Netherlands and Peru rejected the draft text proposed by China, which chairs the council this month, and drafted by Britain, saying it did not address their concerns about the dire humanitarian crisis in Yemen.

“We feel that the current situation above all else warrants a resolution that gives both the special envoy and OCHA the support they need to take a step towards ending the conflict in Yemen and the suffering of the Yemeni people,” the trio said in an email to the council seen by AFP.

OCHA, the UN office of humanitarian affairs, has warned that Yemen is on the brink of the world’s worst famine in decades.

Yemeni pro-government forces, backed by Saudi-led coalition fighter jets and attack helicopters, have launched an offensive on the rebel-held port city of Hodeida despite warnings from aid groups that civilians are at risk.

In the past 24 hours, fighting claimed the lives of 27 rebels and 12 pro-government fighters on the outskirts of Hodeida city, a medical source told AFP on Wednesday.

Nearly 200 combatants have been killed in the past week, according to military sources.

UN Secretary-General Antonio Guterres on Friday called for a halt to violence in Yemen to pull the country back from a “precipice” and build momentum towards talks on ending the war.

That appeal came just days after the United States, in a significant shift, piled pressure on its Saudi ally to end the war by calling for a ceasefire and peace talks.

The United States, France and Britain – all veto-wielding council members – support the coalition in its campaign, launched in 2015, to restore the internationally-recognized government in Yemen but the heavy civilian toll has raised concerns.

Following the US shift, Britain began work on drafting a resolution that would provide for a ceasefire, humanitarian access and UN-sponsored talks on ending the war.

UN envoy Martin Griffiths, who recently met with US officials in Washington, is planning to invite the Saudi-backed government and the Huthi rebels to talks in Sweden this month.