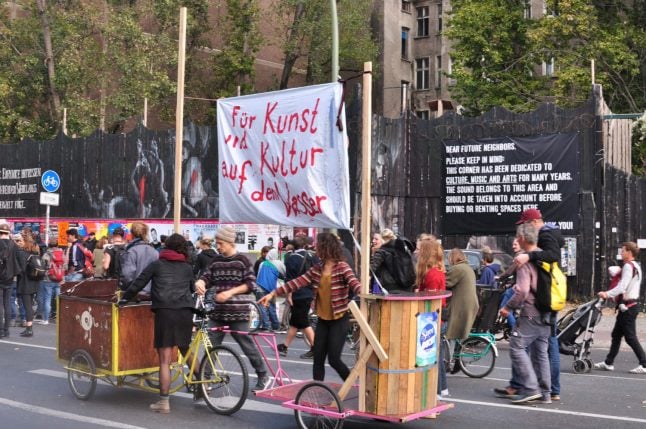 A protest against the planned development in Rummelsburg. Photo: Emily Manthei

On Thursday, October 18th, a Lichtenberg zoning meeting was meant to decide the fate of a piece of lake-front property near the Ostkreuz train station. Instead, more than 1,500 renters, club-goers, families and houseboat-dwellers demonstrated against the Bauplan, or construction proposal, submitted by Israeli millionaire Benjamin Kahn and local high-volume real estate developer Gijora Padovicz. It would turn the northwest side of the Rummelsburg Bay into luxury housing, a hotel and upscale tourist attraction, Coral World, a giant marine park company with venues in Australia, Israel, Spain and the US.

Neighbours' concerns include displacement of long-term residents, disruption of the last open space on the bay, increased tourism near a crowded residential neighborhood, and lack of space for a new school nearby.

The development was originally backed by Andreas Geisel of the SPD, the Berlin Senator for Urban Development and Environment in 2016 when the property was sold to Padovicz; he has since changed positions in the Senate, but officially still supports the creation of the mixed-use tourism and housing development.

Eroded by commercial projects: a trend in Germany?

While Berlin relies on tourism to drive its economy, the alternative, artistic scene continues to be eroded by commercial developments.

“Berlin is running out of public land, where you can build something that is against the effects from the outside,” activist and protest organizer Florian Hackenberger said. “A huge amount of money is flowing into the real estate sector, globally. It’s really difficult to counter that.”

Berlin is not the only German city drawing real estate speculators, sparking conflicts between locals and international property planners.

Pricewaterhouse Cooper’s (PwC) 2018 Emerging Trends for Real Estate Report for Europe in 2018 ranked Frankfurt, Munich and Hamburg just behind number-one Berlin, all within the top six best real estate markets on the continent.

British investment firm Knight Frank reported that 60% of Germany’s 2017 commercial property investments were made by foreign investors, and that “Germany has consolidated its position as Europe’s safe haven for capital,” according to Kate Everett-Allen, the lead author of the report.

The Global Residential Cities Index, a worldwide residential real estate price index compiled by Knight Frank, ranks Berlin fifth in year-over-year residential price growth, with a 14.9% rise in real estate prices from the first quarter of 2017 to the same period in 2018. Frankfurt’s prices rose by 11.8%, with property prices in Hamburg and Munich both increasing by about 8%, according to the report. “The price increases for ownership of property has outpaced the rent increases by far,” says Dr. Konstantin Kortmann, director of residential development for international real estate firm JLL, headquartered in Frankfurt. “The share of households renting is slightly increasing.”

That may come as a surprise to tenants who thought it couldn’t get any worse than the rent hikes they’ve experienced in the past several years. But increasing rentership in a country with historically low home ownership is just one of the factors producing the higher prices.

The others include “less new construction of homes, increased immigration, increased legal requirements for energy-efficiency and “disregard of the rental price brake law,” explained Dr. Jutta Hartmann of the Deutsche Mieterbund.

SEE ALSO: How to join a Mieterverein (renter's association) in Germany

The Rummelsburg Bay project is just one example of how the nation’s trend toward international investment is stirring local resentment.

Small, grassroots actors do remain visible in the housing conversation.

With rising rents and evictions mounting, Berlin introduced the Mietpreisbremse, the rental price brake law, in 2015 to stop landlords charging more than 10% above the neighborhood average on new rental contracts.

The law has since been passed in Munich, Hamburg, Stuttgart, Düsseldorf and Frankfurt as well. And while it can lower some renters’ prices, it requires a proactive approach from tenants, who must also take the risk of souring relations with their landlord.

Legal advisers at wenigermiete.de specialize in helping tenants calculate if their rent is too high, and contacting landlords directly to negotiate rent decreases. The service is free of charge to tenants; if a rent decrease is successful, the legal advisers receive the rental price difference of four months from the landlord in question.

The local Mieterverein offer more individualized legal advice on matters not limited to the rental price brake, but their advice is only free to existing members, who pay a monthly or annual membership fee.

SEE ALSO: Rising rents and stiff competition: what you need to know about Germany's housing market

Although they have succeeded on behalf of some tenants, Dr. Hartmann has warned that the rent price brake does not go far enough. “Tenants are often happy to find an apartment at all in this tense housing market, and subsequently do not want to get into a dispute with the landlord right away over the allowed rent,” she said.

An obstacle to investment

Jochan Möbert, author of the Deutsche Bank 2018 housing report, has a different issue with the Mietpreisbremse. “The rent brake has turned out to be an obstacle to investment and tends to harm tenants rather than protect them,” he says, by tightening real estate supply while demand for housing continues to increase.

More obstacles may be on the way, too. Berlin’s mayor, Michael Müller, suggested blocking foreign investors from Berlin’s real estate market in August, in a statement to Frankfurter Allgemeine. He also advised, in an opinion piece in Handelsblatt Global, that the federal government stops selling land privately. Instead, land suitable for housing should be sold to the municipal housing companies, or leased to cooperatives and private developers only as a second option. While dampening the rental increases, the underlying problem remains a lack of construction. Dr. Kortmann warns that “steep price increases are a function of the market, and it should stimulate the production of new houses, meaning something to soothe the demand. Instead, in many cities, they are trying to bring down the ‘fever’ by forbidding the ‘fever.’”

The approach by the government in Hamburg is different. “Public authorities have set up a coalition for residential development, along with private companies and state-owned companies,” Dr. Kortmann says. “They initially aimed at creating 6,000 units per year; now the bar is up to 10,000 per year. That has had an effect on price increases.”

Hamburg’s “Alliance for Housing” initiative requires developers to build equal numbers of units for owner-occupiers, market-rate renters and subsidized renters. In return, the city issues building permits in a speedy manner, solving the complaint of many developers about the years of time spent in the zoning and permitting phase.

But that time of zoning process-limbo is exactly what the group protesting the Rummelsburg Bay project is counting on.

Ordinarily, a district’s local land use administrators will develop a Bebauungsplan, or a development plan, to decide on land usage. Then, a potential investor or developer will propose a plan to receive a development permit for a building that fits within the specified land use pattern.

Hackenberger explains that in this case, the State of Berlin provisionally sold the property on the Rummelsburg Bay to a developer in 2016, before a zoning plan was ratified.

Because of the error in order, the protest group believes they can stop the proposal by pushing for a plan that doesn’t include commercial tourism.

Hackenberger, who has been involved with grassroots efforts to design a plan for the land around the bay since 2014, claims that city land use administrators have ignored the community’s suggestions when developing their zoning conditions, or the Bebauungsplan: “There were 167 inquiries, and only one was addressed,” he says.

Those requests include a new elementary school to accommodate the overflowing Lichtenburg school district, more units of affordable – not luxury- housing, and retaining the alternative culture and housing venues currently on the land.

The proposal would displace residents of two altbau apartment houses, artist workspaces, a beer garden, houseboats, and a small docked ship currently being occupied as a youth cultural centre.

Tenants at the two apartment buildings have already worked with lawyers at the Berliner Mieterverein to avoid eviction and keep themselves directly in the fight. Although the local organization's advice about evictions is different on every occasion, here it involved finding inconsistencies in the lease. “A lawyer looked through their rental contracts and advised them that although their contracts claim a time limit, they are actually unlimited because there were errors in the contracts,” Hackenberger said.

Citizen activism: building from the ground up

So how can German cities solve the demonstrable and undisputed housing shortage when protesters are dissatisfied with development plans and displacement?

The Runder Tisch Liegenschaftspolitik, or Round Table for Real Estate Politics, an initiative Berlin established in 2012, brings developers, investors, citizens and politicians together every six to eight weeks to open up ideas and strategies for civil society-led urban development.

Lennart Siebert, coordinator for the Runder Tisch, says the city has many ways for civil society and local government to interact.

“The Runder Tisch is a format that could be done in every city,” says Siebert. “You just have to make it clear to them [policy makers] that the civic society is important and they do play a role.”

Siebert was involved in another grassroots housing initiative to turn a large, empty Berlin government building, Haus der Statistik, into integrative housing and artist space. “We presented our project there [at the Roundtable] in the very early stages,” he added.

Subsequently, the Haus der Statistik plan was presented to the Berlin Senate, and is preparing to renovate the building in early 2019, less than three years after their Bauplan was proposed – a relatively speedy turnaround. The next meeting, open to all, will be on November 30th.

The demonstration at Rummelsburg Bay succeeded in sewing doubt among the zoning committee. They agreed that the issue of finding space for a new elementary school should be settled before approving any Bauplan for Rummelsburg Bay.

Hackenberger says the overall goal is to create an alternative proposal, based on input from the community, to develop the bay with more affordable housing without evicting any current tenants, and keeping some space for nature.

Although some citizens may balk at development no matter what it looks like, advocates for housing affordability know that the work of direct democracy is never finished. It takes a village to build a village.