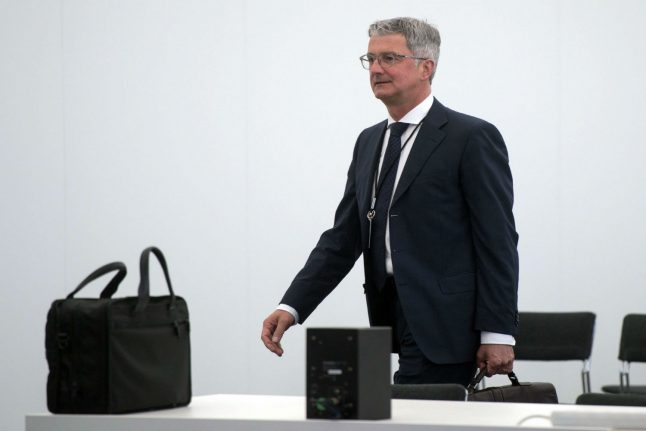 Stadler at an Audi convention in Neckarsulm, Baden-Württemberg, where Audi has a big factory. Photo: DPA

The higher state court in the Bavarian capital Munich said in a statement it had “suspended enforcement of a custody order that had been in effect since June 18th in the investigation against Rupert St.”

However, “the court believes that there are still strong suspicions” against him and that “there remains a danger of a cover-up, the reason he had been imprisoned,” it said.

Stadler was officially removed as Audi chief executive in early October after months in jail. His arrest came a week after Munich police raided his home over charges of fraud and falsifying documents that allowed diesel vehicles equipped with manipulated software to cheat regulatory emissions tests.

Prosecutors said the custody order was aimed at stopping him “seeking to influence witnesses or other suspects” in the probe.

On Tuesday, judges said that “refraining from contact with all persons relevant to the investigation has been made a condition” of the release, with Stadler forfeiting a bail payment if he breaches the terms.

The allegations are part of the wider “dieselgate” scandal involving 11 million vehicles worldwide from VW and subsidiaries such as Audi, Porsche and Skoda that has gripped Volkswagen since 2015.

Volkswagen has yet to find an official successor to Stadler at the head of its high-end brand, after naming Dutch executive Bram Schot interim boss following the arrest.