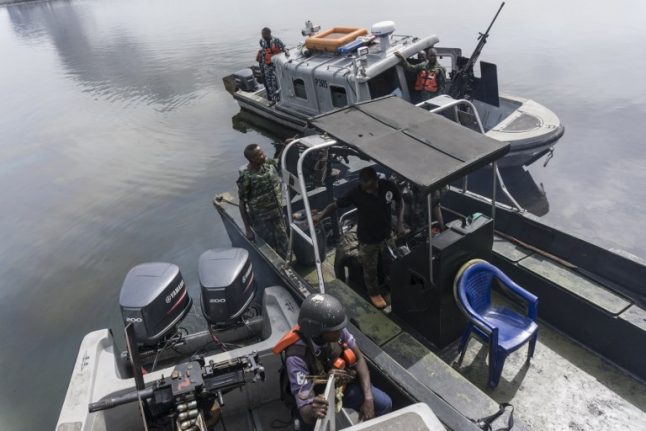 The NNS Pathfinder of the Nigerian Navy patrol near the city of Port Harcourt. File photo: AFP

Negotiations between the owner Massoel Shipping and the kidnappers led to the release of seven Filipinos, a Bosnian, a Croatian, a Romanian, a Slovenian and a Ukrainian, all of whom were then flown to Switzerland, ATS news agency and the Basel prosecutor's office said.

The ship, MV Glarus, and its cargo of wheat are still in the hands of pirates who attacked on September 22nd and destroyed most of its communications equipment.

It was not known whether a ransom was paid for the crew's release.

The ship had been transporting wheat from Lagos to Port Harcourt, in southern Nigeria, when it was hijacked off Nigeria's Bonny Island.

German-language newspaper Blick reported that the pirates belonged to the Movement for the Emancipation of the Niger Delta (MEND), which says it wants the region's population to receive a bigger share of the country's oil and gas revenues.

The Gulf of Guinea has become the world's piracy hot spot, meanwhile.

The International Maritime Bureau said in late July that there were six kidnappings of crews around the world in the first half of 2018. All were in the Gulf of Guinea .

Of 16 incidents in which ships came under gunfire in 2017, seven were in the waters which stretch 5,700 kilometres (3,541 miles) from Senegal to Angola.

Pirates that prowl off the coasts of Benin, Nigeria, and Togo are well armed and generally hold ships long enough to loot their cargoes after cowing crews with violence.