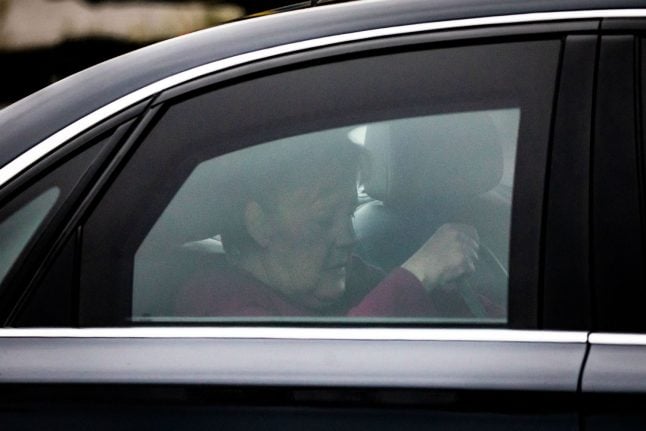 Merkel coming to a CDU committee meeting. Photo: DPA
Merkel's successor to the Christian Democratic leadership could be settled at the CDU party conference in Hamburg at the beginning of December.
“She will not stand again for the chairmanship of her party,” a source within the CDU told AFP a day after voters in the Hesse state punished her party in a regional poll.
In her 18 years as CDU leader, Merkel has always stressed that party leadership and chancellorship belong together. However, party sources have told German media that Merkel will remain chancellor, for the first time separating the role of party chair from the chancellorship.
Like two weeks before in the Bavarian elections, the CDU/CSU suffered double-digit losses in the Hesse state election on Sunday.
The calls for staff changes within the CDU have become louder following both these results.
On Monday the party committees in Wiesbaden, Hesse's capital, and Berlin will discuss the consequences of the result.
In the election, the CDU and its top Hesse candidate, Minister President Volker Bouffier, lost 11.3 points compared to the election in 2013, and reached 27 percent according to the preliminary official result.
The SPD, headed by Thorsten Schäfer-Gümbel, achieved 19.8 percent (minus 10.9 from 2013). The Greens were also the big winners with 19.8 percent (plus 8.7).
What comes next?
Former CDU faction leader Friedrich Merz is ready to succeed Angela Merkel as party leader, he told the Frankfurter Allgemeine Zeitung on Monday.

Merz was prepared to “face up to responsibility” if the party wanted it.

The election of a new party leader is planned for the party conference in Hamburg on December 2nd.

However, in speculations about the chancellory, the most prominent names discussed so far have been Secretary-General Annegret Kramp-Karrenbauer, Federal Health Minister Jens Spahn, and North Rhine-Westphalian Prime Minister Armin Laschet, reported dpa.
The President of the Bundestag, Wolfgang Schäuble, was also discussed as a possibility.
SPD boss Andrea Nahles was initially reserved when questioned about Merkel's next step.
“I can't anticipate the CDU's committee meetings at the moment and don't want to comment on this at this point,” she said.
FDP faction leader Marco Buschmann told dpa: “If the Chancellor says that she is no longer suitable for the party chairmanship, then she has to ask herself even more whether she is still suitable for the chancellery.”