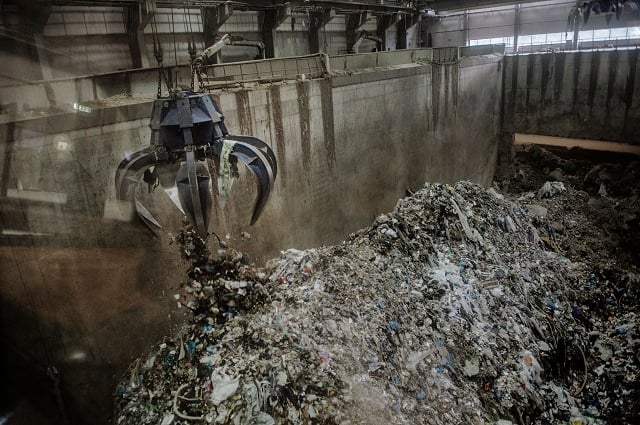 A waste incinerator in Västerås. Photo: Pi Frisk/SvD/TT
This article is available to Members of The Local. Read more Membership Exclusives here.

Sweden imports around 1.3 million tonnes of rubbish each year, most of it from Norway and the UK, and has long been hailed for its efficiency in handling waste.

Only one percent of waste produced in Sweden ever reaches landfill, with the remaining 99 percent recycled, reused, or converted into energy.

It's that last option which is most controversial: a large amount of rubbish, including a lot of the imported waste, is converted to heat and electricity at so-called 'waste-to-energy' centres. This is done through incineration. Waste is burned at the more than 30 plants across the country, and then used to make heat and electricity.

In 2016, that included 1.3 million tonnes of waste from other EU countries, which accounted for between 20 and 25 percent of all the rubbish which was burned in the plants that year. Because Sweden's plants can charge other countries for the service, and then earn money again from the heating and electricity the waste creates, it's a good business.

“We're a cold country and we have a district heating system, so we can actually make use of the waste that is put into the plants,” Anna-Carin Gripwall from Sweden's waste management trade association Avfall Sverige told The Local, referring to the centralized system which means buildings use a shared heating plant rather than individual boilers or furnaces. One of the waste-to-energy plants. Photo: Pi Frisk/SvD/TT

“In order to make use of energy recovery, you need to be able to use the heating or the electricity that is produced by the plant. In other countries, if you don't have a district heating system or you can't use the electricity, then you're just letting it go up the chimney and it's no use so then it's better for them to use our service,” she explained.

“To say that we import waste is actually wrong: we are paid to receive the waste and we perform an environmental service. That's much better than putting it in a landfill in England, say.”

In Sweden, the energy generated this way meets the demand for heating for 1.25 million apartments, and electricity for 680,000 households.

'We are actually burning fossil fuels'

“Some argue that it's a good way of dealing with waste, but a lot of plastics are made with fossil fuels, and 12.5 percent of waste that is incinerated is plastic,” explained Karin Lexén, secretary general of the Swedish Society for Nature Conservation.

She argues that a tax on waste incineration would highlight that the process is not entirely green.

A previous tax on waste incineration in Sweden was removed in 2010, and in the years since then, both the importing of waste and incineration of it have increased, with more plants being built. In June 2016, the government opened an investigation into whether this should be reintroduced, and came to the conclusion that an incineration tax would not be “a functional and cost-effective means by which to encourage more resource-efficient and non-toxic waste management”. 'Incineration has become a business'

The decision was welcomed by Avfall Sverige, but Lexén argues that such a tax would encourage a focus on waste reduction, reuse, and material recycling as preferable alternatives to energy recycling.

“(The tax) needs to be high enough to really correspond to the environmental problem the incineration is causing. We are actually burning fossil fuels when burning a high amount of the plastics, so taxes should reflect that. It shouldn't be so easy and cheap to export waste to Sweden; the main drawback of incineration is that you lose the incentive (to try other methods),” she said.

“We understand that it's better to burn it than to put it in landfill, but we also think it's really important to move towards a circular economy,” Lexén explained. “You lose the incentive to do that if it's so cheap and easy to burn the waste.”

“It's become a business, and we think it's the wrong way to go. The UK and Ireland for example are really wealthy countries that could be working more on recycling and working towards a circular economy, but it is really easy for them to just export waste to Sweden,” she said. “We are not against energy recycling as a last step, but we need to put a lot more emphasis on the other steps in the waste hierarchy.”

The waste hierarchy is a series of steps, starting with waste prevention, then reuse of products, then 'material recovery' or recycling – where materials are broken down and new products made of the components – followed by energy recovery or waste-to-energy plants, with landfill the final measure.

Avfall Sverige's Anna-Carin Gripwall also pointed to the waste hierarchy when asked by The Local if Sweden should be moving away from waste-to-energy.

“We are already working very hard to reduce waste incineration; we try to reduce and reuse waste and recycle it first, but where that's not possible we put it into energy recovery,” she explained.

“We think that every country should be able to take care of their own waste, but it's not that way now. Hopefully more and more will be reduced, reused and recycled in England so that less will need to go to energy recovery. But as a short-term measure, I think waste incineration is an important step.”

It is not the first time Sweden's internationally acclaimed environmental policies have been criticized as less green than they seem. H&M offers customers vouchers to use in store when they bring in old fabrics (they do not have to be clothes in wearable condition) to be recycled, and has pledged to remove the use of hazardous chemicals by 2020. But the Swedish fashion giant was criticized last year when media reports revealed the chain was incinerating vast amounts of brand new clothes – equivalent to around 50,000 pairs of jeans.