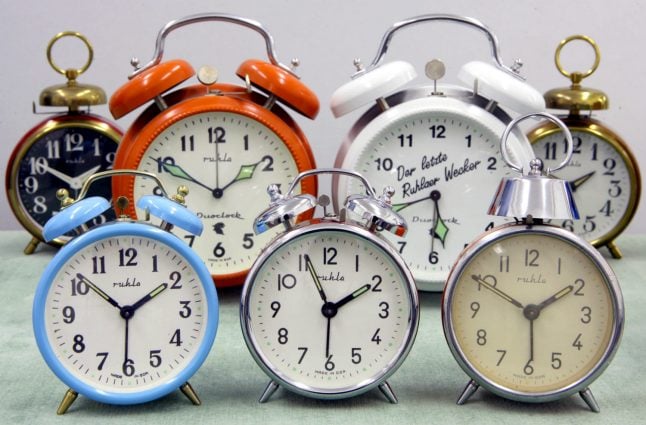 According to the survey carried out on behalf of the DAK health insurance company, 80 percent of respondents believe that turning the clocks back and forward is unnecessary and should be shelved.

More than every fourth person reports health problems during the changeover to winter time, the survey found.

This year the clocks are put back one hour during the night from Saturday to Sunday (October 27th to 28th), at 3am to be exact.

Technically daylight saving means an extra hour of light in the evening, while standard time means there is less darkness in the morning. The clocks 'spring forward' an hour in March and 'fall back' an hour in October, every year.

Some people argue that the time changes help save on energy costs as well as letting people enjoy the light more, but others say they would benefit from time remaining the same all year round.

SEE ALSO: Everything that changes in Germany in October 2018

In an online survey conducted by the EU Commission in August, 84 percent of respondents were in favour of abolishing the changing clocks and most people voted for permanent summer time.

As a consequence of the results, the EU Commission has proposed to end the time changes in Europe in 2019, and to leave it up to the member states to decide whether they want to have winter or summer time permanently.

“Many people suffer from the constant change,” said DAK board member Andreas Storm. According to the results of the DAK survey, 79 percent of those affected feel tired or flabby due to the clock changes.

More than half stated that they had problems falling asleep or lying awake in between, while poor concentration and irritability were also reported by respondents.

Every eleventh person even said that they experience a depressive mood.

A total of 3521 people from across Germany took part in the questionnaire conducted by Forsa for DAK from September 27th to October 13th.

Storm added that at the European level, the situation regarding time changes must be clarified before the European elections in May.

History of the clock change

Germany became the first country to implement Daylight Saving Time in 1916 during World War I.

On April 30th, clocks in the German Empire were set forward by one hour to start the world's first DST period. However, the enthusiasm was short lived. Germany stopped doing it in 1919, and it wasn't until 1980 that the practice started again.

Now most countries in Europe take part in the clock changes, as well as some around the world.

The time changeover in its current form was reintroduced in Germany in 1980 – with the aim of saving energy. Its success is controversial, with the European Commission reporting that energy savings are minimal.

The Physical Technical Federal Institute (PTB) in Braunschweig, which is responsible for the changeover in Germany, says getting rid of the clock change technically wouldn't be a problem.

Any decision could be implemented by the PTB without considerable effort, it said after the EU-wide survey results were released earlier this year.