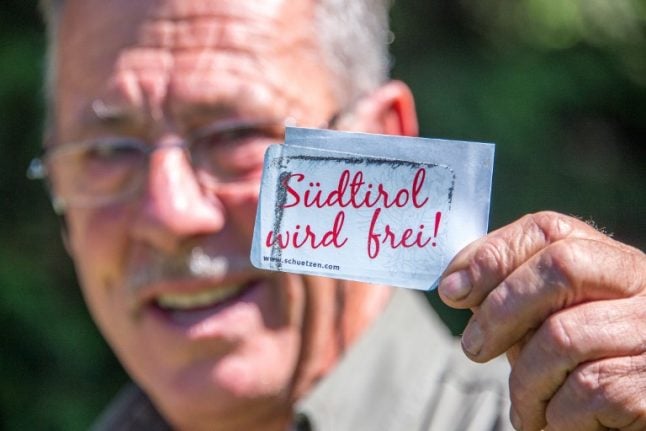 The Austrian government has angered Italy with plans to offer dual citizenship to the majority German-speaking population of South Tyrol province.

As voters elect the province's parliament this weekend, with dual citizenship a hot-button issue during the election campaign, here are some facts about a region where many still feel a deep affinity to Austria.

What is South Tyrol's status?

South Tyrol, or Alto Adige in Italian, covers an area of around 7,400 square kilometres and has a population of around 500,000.

It formed part of the Austro-Hungarian Empire for 550 years until it was ceded to Italy in 1919 just after World War I. After World War II, South Tyrol and the neighbouring province of Trentino formed the autonomous region of Trentino-Alto Adige.

The rights of the German- and Ladin-speaking minorities were officially protected under the 1948 Autonomy Statute. But the South Tyrolean People's Party began pushing for greater provincial autonomy in the mid-1950s, and in the 1960s German-speaking militants even carried out a series of sometimes deadly bomb attacks against symbols of Italian state authority.

A revised statute came into force in 1972, devolving most powers to the provinces and setting up power-sharing between the linguistic groups in South Tyrol.

Around 65 percent of South Tyroleans identify themselves as German speakers, 27 percent Italian and four percent Ladin, a Romance language.

Are people happy with the current status quo?

Most people seem to be. The Open Democracy website reports that the proportion of South Tyroleans
comfortable with “socio-political cohabitation” between the linguistic groups rose from eight percent in 1991 to 53 percent by 2014.

While many parties representing German- and Ladin-speakers still have pro-independence statutes, the province is proud it is frequently held up as a model of peaceful cohabitation. What is Austria's proposal?

Austrian Chancellor Sebastian Kurz's idea is to offer Austrian passports to South Tyrol's German- and Ladin-speaking populations, but not to Italian speakers. But Vienna has not spelt out in detail who would be eligible.

“The first would be historical or genealogical, where the applicant must prove that their parents or grandparents were citizens of the former Austrian Empire,” Pallaver said. “But as successive generations pass, such a lineage becomes increasingly difficult to prove.”

The second variant would be ethnic and linguistic. “South Tyroleans must officially choose which linguistic group they belong to. But no language tests are carried out to verify a person's fluency,” Pallaver said.

Another complication is that Austria does not permit dual nationality.

Who is for and against?

Most parties representing German- and Ladin-speakers are in favour, while most of the Italian parties are against, echoing Rome's position.

South Tyrol's Green Party says excluding Italian speakers would be problematic and could fuel resentment between the different language groups.

Some opponents also argue the scheme could be used as a back door for migrants to gain Austrian nationality.

Is a solution likely any time soon?

With no concrete proposal on the table from Vienna and fierce resistance in Rome, no solution is in sight in the near term, says Marc Roeggla, researcher in minority rights at the EURAC institute in Bolzano.

“It's very, very difficult to say. I could say it will happen within the next few years.” But it all depends on what solutions Austria puts forward, he says.