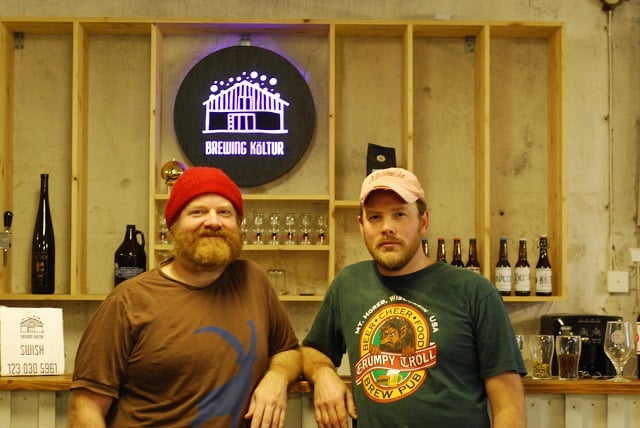 Lincoln runs a local brewery south of Stockholm, which he launched in 2013 after first moving to Sweden to study in Umeå four years earlier. His great-grandparents moved from Sweden to the US, and he says he considers it “one of [his] homes”.

But he has now been ordered by the Migration Agency to leave the country. His application to convert his residence permit into permanent residence was denied, as were three subsequent appeals, because of a law requiring foreign workers to earn a salary above a minimum threshold.

“We made a choice to take a low salary so we could get the brewery to the point that we want sooner, rather than having a good wage and have the company struggle,” Lincoln tells The Local after the site Beer News first reported his story. “I made the choice to essentially work for free and live like a student.”

“We shouldn't be told how to run our business in order for me to stay. We have done nothing illegal. We chose to put our business first, thinking long term. We've paid all of our taxes,” he explains.

Among other things, the money went into equipment, a warehouse, and hiring a brewery consultant to streamline production. By investing the profits back into the business, both Lincoln and his business partner Daniel Norlindh sacrificed their salaries for two years, using other means to support themselves; personal savings and support from family, in Lincoln's case.

After exhausting all options for appealing the deportation decision, the entrepreneur has chosen to leave in order to avoid a ban on returning to Sweden, and will fly back to the US on Monday. He hopes to return to Sweden in the future after applying for a new visa from the US, but is unsure when that will be and has received conflicting information.

In the meantime, Lincoln's business partner Norlindh will keep the business running with assistance from his brother Gabriel. Lincoln will continue to work on events and sales from the USA, but he says that leaving the country has come at an “inopportune moment” for the company, not least due to the six-hour time difference.

The business partners have received support from friends, customers, and others who have gone through similar processes and offered help based on their own experiences.

“I've been surprised by the fact that so many people have had the same thing happen to them, or know someone who's had the same experience,” Lincoln says. “And yet it doesn't seem that anyone is able to do anything about it.”

He says that information was scarce when applying for his visa, often finding that information on Migrationsverket's website was different from what their staff told him in person, and that after receiving the first negative decision on his permit extension, there didn't seem to be any room to take the specific circumstances into account.

“It's very bureaucratic. I had a great case officer but I didn't feel like there was anyone truly listening,” Lincoln explains. He also thinks there could be clearer guidance earlier on in the process, explaining that he thought Migrationsverket's only required entrepreneurs to be financially able to pay a salary – which he proved by showing the profits of the business – rather than actually needing to pay out that salary.

However, he feels positive that he will be able to continue working at the brewery from Sweden.

“I wouldn't change anything; we still would have run our company the same way. One of the questions I've been surprised by is when people have wondered how I'm so optimistic. But to me, the second I'm not optimistic is the time that I should quit – that doesn't match the entrepreneur mindset of believing in the 20-year plan more than the two-week plan,” the 37-year-old explains.

When asked what the impact of the strict legislation might be on international entrepreneurs, he says: “It certainly doesn't attract [entrepreneurs]. It has shifted my opinion of Sweden as a country. I will be very vocal, and have been, that I do not believe Sweden is a good place to run a small business. There are improvements to be done, but there are enough people here who care about the issue and think that Sweden can do better, so I would love to contribute to that in some way.”

Earlier in the year, another foreign entrepreneur was threatened with deportation for giving himself a pay cut, a decision he made in order to allow his company to grow.