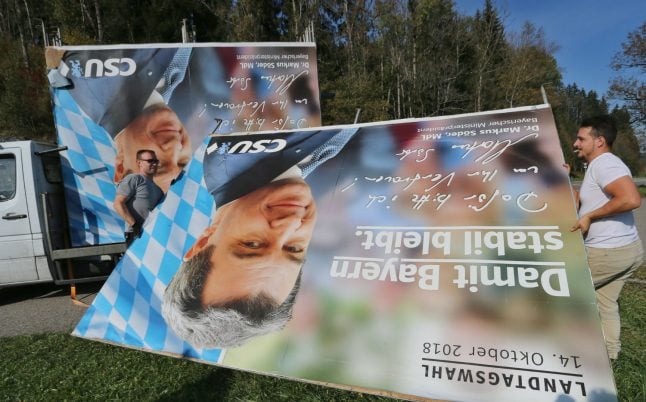 A CSU election poster being dismantled on Tuesday. Photo: DPA

It’s hard to believe there was a time in the not so distant past that the CSU hardly needed to campaign before elections in Bavaria.

Generally, the party knew it would do well, that it’s place in the Free State was secure.

The party is as synonymous with Bavaria as the traditional Dirndl and Lederhosen worn by party-goers at Octoberfest, the wheat beer paired with Brezel – or even to the crosses that are hung in public buildings, a controversial order that was put into force by the party.

This German state, that almost feels like a small separate country within the Federal Republic due to the way it marches to the beat of its own drum, wasn’t known for throwing up too many political surprises.

Not so anymore. In Sunday's state election, the CSU, sister party of Angela Merkel’s CDU, won 37.2 percent of the vote, dropping 10 percentage points, its worst result since the 1950s, reported DPA.

As the votes were counted on Sunday, eye-popping results from across the party spectrum came rolling in. There’s no doubt it will go down in history as an election that stands out – but has there been a 'political earthquake' as many commentators cynically dubbed it? I’d argue no…but there has been lots of interesting movement.

On the face of it, things have changed remarkably in Bavaria. Aside from the CSU, the Social Democrats (SPD) halved its result of 2013, gaining just 9.7 percent.

The second strongest force was the Greens with 17.5 percent – more than doubling their vote share compared to 2013. The Free Voters (Freie Wähler/FW) followed with 11.6 percent, the Alternative for Germany (AfD) with 10.2 percent, while the Free Democrats (FDP) scooped just 5.1 percent.

German media reported how these dramatic state election results could impact the wider political landscape, pointing to the fact that those who had fared worst, the CSU and the SPD, are part of the grand coalition based in Berlin. Spiegel Online said that although “the epicentre of the political earthquake was in Bavaria … the tidal wave could sweep away the federal government”.

But let’s look at the facts: It seems likely that the CSU will enter into an alliance with the Free Voters. Bavaria Minister President Markus Söder and party leader/Interior Minister Horst Seehofer have both spoken out in favour of this coalition.

Alliances with the SPD and the Greens are not realistic, DPA reported. Exploratory talks are to take place on Wednesday – the CSU hopes to be able to conclude the talks in a day.

Led by Hubert Aiwanger, the Free Voters is a grassroots, community-feel party that stands on the right.

So Bavaria is on course to be governed by two parties on the right side of the spectrum, instead of one. That’s a change but is it really a big one?

“That’s the important point,” says Münch. When you read the newspapers you get the idea that there’s been a big policy change but of course we don’t have that.”

Spiegel Online seconded Münch's view that “not much will change in Bavaria if the Free Voters form a coalition with the CSU,” they wrote Tuesday.

SEE ALSO: The winners and losers – 7 things you need to know about the Bavaria election

To look at it another way: the vote share of parties on the left (The Greens, SPD and Left Party) only dropped from 31.3 percent in 2013 to 30.4 percent. On the right (CDU, CSU and FDP and AfD) it went up slightly from 57.5 percent in 2013 to 59 percent. That’s not a shift of earthquake proportions.

As we reported on Monday, the Free Voters could be the biggest success story of the election.

Spiegel says that unlike the Greens, FW leader Aiwanger doesn’t speak of a “historic” situation; he instead wants to “glide as quietly as possible into the government” – but he knows what he wants.

The Free Voters party is slightly to the right of CSU on some ages such as migrant and refugee policies.

Unlike the CSU, the party doesn’t want to build a third runway at Munich Airport and it would like to end the 'Bavaria One' space program, beloved by the CSU or at least Söder, judging by his excitement at the launch of 'Mission Zukunft' (Mission Future).

The party also has a high social agenda and wants to abolish daycare fees for families. “The Freie Wähler is conservative but also a bit populist, they try to get what people want,” says Münch.

Münch adds that the party has spoken out against the absolute majority that the CSU has achieved over the decades – so, unsurprisingly, the Free Voters “are really very happy to be now part of the game and to be able to tell the CSU what they want to achieve,” she adds.

For the last few weeks there's been a slew of deliriously happy pictures of Green party members spread across the media. Clutching sunflowers and speaking out about the huge shift in Bavaria, they've been the big story, no doubt about it.

And of course the Greens' membership reaching an all time high in Germany can't be given a negative slant. But without being part of the governing coalition in Bavaria, what can they really achieve?

Münch says not much – and voters will be disappointed.

“The opposition has no power,” she says. “Of course it’s it’s important to have more mandates, to receive more money and to have more people working for you, but you cannot influence the Bavarian state parliament in opposition.

“Those who voted in favour of the Greens they will be a little disappointed because there will be no change in Bavaria.”

So what are the changes, if any?

The big losers – the CSU and SPD are currently doing deep post mortems trying to figure out what went wrong, and possibly shaking up roles. The CSU's Seehofer might step down, for example, and said on Tuesday he was willing to discuss staff changes.

“It was much easier for them in the past,” she says. She describes the CSU's success as a “recipe” – which was to be the only Bavarian party that was important to the state of Bavaria and able to influence at the federal and European levels. Of course it's not just Bavaria, Germany – and its voting behaviour – has changed too. The refugee crisis, in particular Merkel's open borders policy, is talked about daily in connection to everything happening in the country, indicating what a big impact it's having on the country.

At the height of the crisis in 2015 Merkel was making waves all over the globe and applauded by many who believed that countries had a responsibility to help in an unprecedented situation.

Fast forward three years and there's been criticism Germany's lack of organization and not enough integration. It's also fuelled the meteoric rise of the anti-immigration AfD and resulted in far-right unrest, such as at Chemnitz.

Seehofer tried to win back AfD voters in the run-up to the election by demanding tighter immigration controls  – almost toppling the coalition while he was at it – but ultimately failed and came off like a toddler throwing toys out his pram.

But immigration isn't the only thing on the minds of voters and not everyone has fears about it. You only have to look at the hundreds of thousands of people who came out to protest against racism and hate at the 'Unteilbar' demo in Berlin on Saturday.

Voters are also thinking about rising housing prices, education, care, and other issues.

And although they are in opposition in Bavaria no one could have predicted the huge swell of Green voters – and it will be interesting to see if this is a trend that will be replicated elsewhere.

With the Hesse state elections in just under two weeks time, another outlook on the German political landscape will be unveiled.

One thing's for sure, German politics is hard to predict and full of surprises.