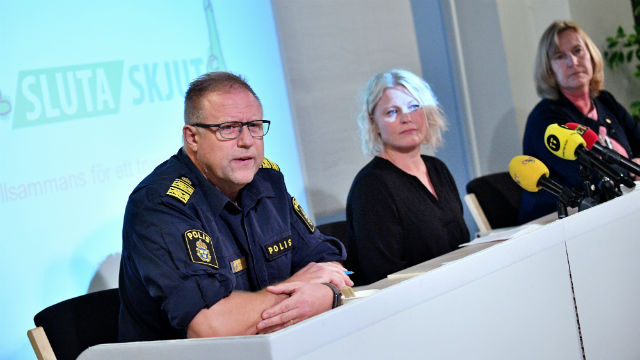 Malmö police chief Stefan Sintéus (left) at the press conference on Monday. Photo: Jonas Nilsson/TT
The meeting was the first of its 'Sluta Skjut', or 'Stop Shooting', programme, heavily influenced by the Group Violence Intervention (GVI) strategy used in many US cities.
“We do not want you to die, we do not want you to kill anyone, and we want you to take whatever help is available,” Petra Tullgren, from the Malmö division of the Swedish Prison and Probation Service, said in a press conference on Monday, held in the same rooms where the young men had gathered four days earlier.
Ahead of the conference, Malmö police chief Stefan Sintéus had said that the Malmö police were committed to learning from international best practice.
“It's important to us to follow what has been proven by research, and the results in the USA, among other places, have been very good,” he said.
“My judgement is that several of them actually want to leave their criminal lives behind them, but quite simply can't do it,” he added during the press conference.
Manne Gerell, senior lecturer in criminology at Malmö University, which is evaluating the project, told The Local that it made sense to try the approach in Malmö.
“It's worth a try because we have a big problem with gun violence in Malmö and we really haven't made any systematic efforts to reduce gun violence,” he said. “It might not work in Sweden, but it's got a good record in reducing gang violence in the US.”
Eleven young men have been killed in shootings in Malmö so far this year, and 26 since 2016.
READ ALSO:
According to the Sydsvenskan newspaper, the ten men called to the meeting were between 20 and 25 years of age. Nine of them, all of whom are on probation or conditional release, turned up to the meeting.
There, they were lectured by Ola Sjöstrand, Malmö's chief prosecutor, city councillor Andreas Schönström, by representatives of a voluntary organisation, and by a relative of someone whose child had been killed in a shooting.
Six out of ten afterwards said they were willing to be contacted by Social Services for help in getting out of the criminal world.
According to Sydsvenskan, the idea is to get across to the young men that they are under observation and warn them that the police and other authorities were ready to use all the power at their command to bring them to justice if they continued to use firearms.
Measures threatened included visits to the homes of their friends and relatives, and random checks on the streets, and special investigations by the Swedish Tax Authority, the Swedish Social Insurance Agency, and the Swedish Public Employment Service.
The young men were then briefed on the resources available to help them leave the criminal environment, how to get jobs, education, housing and protection from reprisals.
According to Malmö City Council's site for the project,  GVI is credited with reducing the number of young men murdered in Boston by 63 percent, the number of gang murders in New Orleans by 32 percent and the the number of shootings in Stockton by 42 percent.
The project is a cooperation between police, Malmö's municipal authorities, the Swedish Prison and Probation Service, the Swedish National Council for Crime Prevention, and  civil society organisations.
It has received 7 million kronor in European Union funding, and will run for two years, with its effectively being evaluated by Malmö University. New York's John Jay College, which developed the method, is acting as a consultant.