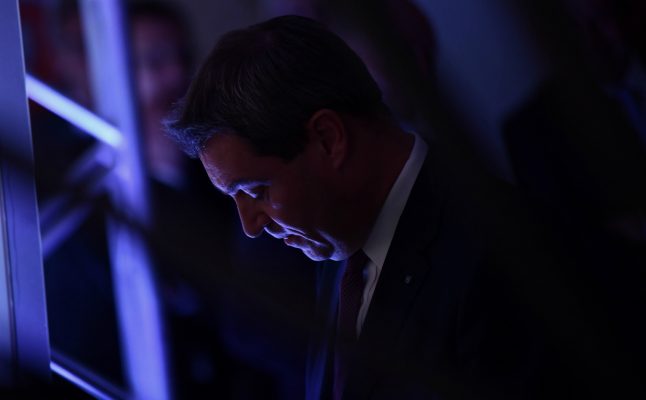 The Christian Social Union (CSU) scored 37 percent, a steep 10-point drop from four years ago in the wealthy Alpine state it has ruled almost single-handedly since the 1960s.

As a result, it loses its absolute majority and must scramble for coalition allies — likely the conservative Free Voters, who won 11 percent.

Merkel's other national governing partner, the over 150-year-old Social Democrats (SPD), halved their ballot box support to 9.6 percent, ceding the position of Bavaria's second biggest political force to the Greens.

“Debacle for CSU and SPD,” ran the online headline of Bild daily, while Der Spiegel called it a “bitter defeat” for Bavaria's traditional ruling party.

State premier Markus Söder, 51, conceded the result was “painful”, while CSU party chief and national Interior Minister Horst Seehofer said “it was not a nice day for us”.

SEE ALSO: Follow our Live Blog now for all the Bavarian election action

The anti-immigration Alternative for Germany (AfD), which rails against Muslims and demands that “Merkel must go”, won 11 percent and entered the 15th of Germany's 16 state assemblies.

The head of Italy's far-right League, deputy prime minister Matteo Salvini, hailed the rise of the AfD at the expense of the older and bigger parties, saying that “in Bavaria, change has won” and adding an “arrivederci” (goodbye) to Merkel.

For Merkel, in power for 13 years, the Bavaria election spells a new headache just over half a year since she managed to forge a fragile “grand coalition” with the CSU and a reluctant SPD.

She said this “must serve as a warning for the German CDU” ahead of another dangerous state election, in Hesse state, two weeks from now.

SPD leader Andrea Nahles conceded a “bad result for the SPD … and for all mainstream parties” that she attributed partially to “the bad performance of the grand coalition in Berlin”.

The AfD's Alice Weidel, meanwhile, jubilantly declared that Merkel's government “is not a grand coalition but a mini-coalition” and demanded she “clear the way for new elections”.

The Bavaria poll result shattered old certainties for the CSU, which had long dominated politics in the state known for its fairytale castles, Oktoberfest and crucifixes on classroom walls.

Since Germany's mass migrant influx of 2015, the CSU has hardened its folksy brand of beerhall politics with increasingly aggressive anti-immigration and law-and-order positions.

At the national level, Seehofer became Merkel's harshest internal critic, echoing the AfD's rhetoric about the more than one million refugee and migrant arrivals.

The poll result Sunday showed that Seehofer's brinkmanship in Berlin backfired as voters worried about immigration defected to the AfD, while those turned off by the harsh new tone drifted to the Greens.

“If you copy the far right, you lose,” gloated the Greens' national co-leader Annalena Baerbock.

A poll by public broadcaster ARD showed that most voters blame Berlin-based politicians for the CSU's poor performance.

While 56 percent saw Seehofer as the chief culprit, 24 percent pointed to Merkel, followed by Söder at eight percent. Seehofer, 69, has already declared he intends to stay on and “complete my mission” as Interior Minister.

The Bavaria election served as a painful bellwether of the national mood. Across Germany, support for the CDU-CSU conservative union dropped to an all-time low of 26 percent, according to an Emnid poll for Bild am Sonntag newspaper.

In second place, Germany-wide, were the SPD and Greens, neck-and-neck at 17 percent each, followed by the AfD at 15 percent.