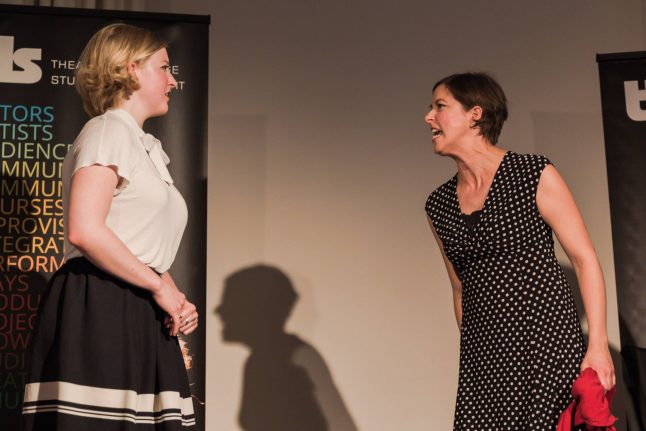 When Abigail Paul moved from Florida to Frankfurt in 2001, she only expected to have a one-year adventure abroad.

“I said, ‘I think I’ll go back soon,’” says Paul, who has now called the sky scraper filled “Mainhatten” home for 17 years.

Having a theatre degree under her belt, Paul had assumed the only job she could acquire as an American abroad would be teaching English. But initially that didn’t matter: she was awed by the high quality of life and health care system. “I didn’t worry about using my degree,” says Paul. That changed in 2009, when she met Rene Becker, a fellow American who had studied theatre in the U.S. Sharing a similar vision, the two founded the Theatre Language Studio Frankfurt, an English-language theatre and production company focused mostly on improvisation.

“We shared a point-of-view on what makes a great piece of theatre, simple productions with a high-impact message,” says Paul, now the theatre's artistic director. The TLS now hosts productions ranging from Improv Jams to “Dangerous Play: Improvising Agatha Christie,” mixing a murder mystery and chuckles.

They also offer improv courses geared towards everyone, from amateurs to seasoned performers looking to polish their performance.

It isn’t just native English-speakers who signed up to participate, but also people from around the world.

One-third of Frankfurters hail from somewhere else, often drawn to the city for jobs in technology, engineering and banking. Come their Feierabend, they are desperate to exercise the creativity they don’t in working hours, says Paul.

“Many are eager to meet an interesting group of people, especially after leaving day jobs that don’t stimulate their creativity,” says Paul.

Improv fans! With a change to Wednesday night, the FITS After Work Comedy Hour will now be extended play! FITS AFTER WORK COMEDY NIGHT is more fun for the same cash. This month: the improv battle, followed by long form, followed by a blender jam. #newnight #comedy #improv

She chose an English focus to reach a wider group: “Most expats don’t disparage learning German, they just haven’t learned it yet and want something fun to do in the meanwhile.”

Participants are taught in an American style of improv, inspired by the famous 2nd City comedy club in Chicago. “Due to all of the different nationalities that participate, people have to use universal humour references rather than cultural ones – for example, from American sitcoms,” she says.

Still, similarly to sitcoms themselves, participants tend to mine universal themes for ideas – whether they be someone’s love life, or drawing on humorous situations from the German expat lifestyle.

A scene, for example, might feature Frankfurter newcomers terrified at an Aldi – experiencing the culture shock that comes from being quickly pushed through a check out as though it's a relay race – or bewildered by the bureaucracy of an Amt of some kind.

As with standard American improv, the audience will also make a suggestion – be it for a scene to start out the play or an emotion that that they would like to see the cast encapsulate.

‘A big fish in a small pond’

Paul feels the theatre has achieved a success it couldn’t have as easily in Berlin or other big German cities.

While Frankfurt has no shortage of world class cultural offerings – from the Book Fair starting today to countless operas and museums – it usually “doesn’t focus on local artists like us, or local bands,” she says.

“In running a local theatre in Frankfurt, we have gotten to be a big fish in a small pond,” says Paul.

This article is part of our weekly 'My German Career' series. Have an interesting or unusual job you'd like us to profile? Email our editor Rachel Stern at [email protected]