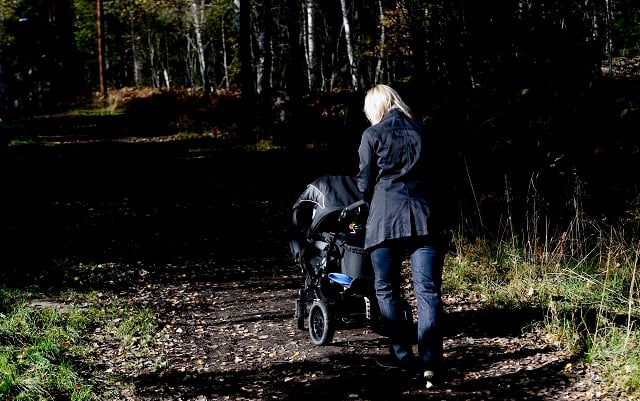 Children in single-parent families are far more likely to live in poverty than those whose parents live together. Photo: Pontus Lundahl/SCANPIX

In total, there were 186,000 children in Sweden living in economic vulnerability in 2016, a drop of 8,000 from the previous year. Poverty fell among children from all demographics, the report – based on figures from Statistics Sweden – showed, but the improvements were coming more slowly for low-income families.

In the five-year period between 2011 and 2016, child poverty among single-parent families fell from 25.2 percent to 21.4 percent, while it fell from 6.5 to 5.6 percent among children whose parents lived together.

“It goes hand-in-hand with a positive economy, with more parents in work. But we have also seen several good reforms, such as child support for large families and increased housing support,” said Ola Mattsson, head of Save the Children in Sweden.

“Things are going better for most families with children. But the changes are happening significantly more slowly for those at the lowest income levels,” he added.

More than one in five (21.6 percent) of children with a foreign background were assessed as living in poverty. This was significantly more than the 3.1 percent poverty rate of children with two Swedish parents, although it still represented a decrease from 25.6 percent five years earlier.

The make-up of the family also appeared to be a significant factor. When taking into account only children with a foreign background in single parent families, the poverty rate was 42 percent – compared to only 1.4 percent among those whose parents were native Swedes and lived together.

The charity's definition of child poverty is based on how much disposable income and support households have, and those that fall into the category might include children who do not have their own bed, access to a bicycle or age-appropriate toys.

“These are extremely low levels, we don't think people always understand how low [the income] levels are. But it doesn't have to mean that these are children who go hungry the whole day or have to wear sandals in winter,” Mattsson said.

Among Sweden's 290 municipalities, Malmö in the southwest is the area with the highest rate of child poverty, at 25.2 percent, more than ten times the level in Kungsbacka (2.5 percent) which had the lowest rate overall.

One positive finding from the report was the fact that child poverty in Sweden's so-called socioeconomically vulnerable areas – defined by a high crime rate and low income levels – had declined significantly. Since 2011, the child poverty rate in two of Stockholm's vulnerable suburbs, Rinkeby-Kista and Tensta, fell by 11.8 percentage points and 10.5 percentage points respectively.

OPINION: 'Yes, real poverty exists in Sweden, but it has been made invisible'