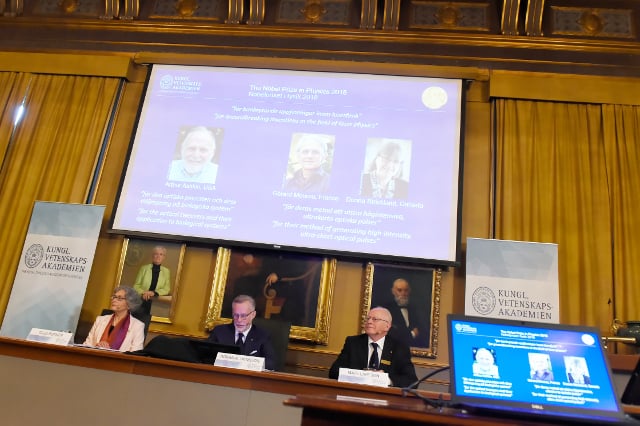 The Royal Swedish Academy of Sciences, which hands out the Nobel Prize in Physics. Photo: Hanna Franzén/TT

So, what are the practical applications of the laureates' research? In the words of Claes-Göran Wahlström, head of atomic physics at Lund University: “We have to be careful about looking too closely for applications. It's basic science; it's an invention which opens fields to do further basic science, then we will see where that leads. Scientists around the world will say yes, this is a good prize because this is the technique and the invention I use to do my research. But as an example, we've heard of CPA lasers being used in laser eye surgery on hundreds and thousands of patients every year. I can also see for example radiation therapy using this technology, but only the future will tell.”

With that, I'll leave you for today. Thank you for following our live blog from Stockholm and please join us tomorrow for the Nobel Prize in Chemistry.

The Local's Catherine Edwards has just spoken with Claes-Göran Wahlström, head of atomic physics at Lund University. He has known Mourou, one of the laureates, for 20 years: “We both deal with high intensity lasers and we have worked together on a lot of committees and in creating the international committee of ultra-intense lasers (ICUIL). Unfortunately I haven't had the chance to work with Dr Strickland but I look forward to meeting her in December. I admire the work she's done and have used the invention she has contributed to.”

We asked him what stands out about the research. Here's what he had to say:

“Firstly the technology has allowed us to make ultra-high intensities which has opened up a brand new field of physics where people are continuously discovering new phenomena. It's also made it possible for more researchers, more university groups to access high intensity. Before this invention, the very high intensities could only be achieved with a huge national facility; with this technology now university groups can build these lasers and start to make strong field physics in their existing laboratories.”

“The third aspect is the high peak power; instead of taking a few shots per day these lasers can run ten shots per second which completely revolutionizes the way we do science. Now you can study and see much more subtle effects because you have more statistics. Those three things together make it extremely promising. I feel confident that within the next 15 years or so there will be other Nobel Prizes that are a result of this invention. It's an enormously expanding field worldwide, and not least in the UK.” My colleague Catherine Edwards is now waiting to speak with one of the experts of the Nobel Assembly, who will hopefully be able to explain more about the research that led to this year's award.

In the meantime, here's a helpful fact sheet and a summary by the Royal Swedish Academy of Sciences:

“The inventions being honoured this year have revolutionized laser physics. Extremely small objects and incredibly fast processes now appear in a new light. Not only physics, but also chemistry, biology and medicine have gained precision instruments for use in basic research and practical applications.”

“Arthur Ashkin invented optical tweezers that grab particles, atoms and molecules with their laser beam fingers. Viruses, bacteria and other living cells can be held too, and examined and manipulated without being damaged. Ashkin's optical tweezers have created entirely new opportunities for observing and controlling the machinery of life.”

“Gérard Mourou and Donna Strickland paved the way towards the shortest and most intense laser pulses created by mankind. The technique they developed has opened up new areas of research and led to broad industrial and medical applications; for example, millions of eye operations are performed every year with the sharpest of laser beams.” 12:15 Why the announcement was delayed

Göran K Hansson, the Secretary-General of the Royal Swedish Academy of Sciences, confirms that they have been able to reach all the new laureates to inform them of the award. He says there was a problem getting a phone connection established with one of them, which is why the press conference started late.

I understand the laureates were all very pleased but apparently Ashkin told Hansson that he may not be able to give interviews because he is “very busy with his latest scientific paper”. Priorities, I guess.

We've now got Donna Strickland on a phone line, presumably speaking to us from Canada. She is now one of three women who have won the Nobel Prize in Physics (out of 210 in total). One of the journalists in the room (I didn't catch from which newspaper) asks her how she feels about that.

“Is that all? I thought there might have been more,” she says. “I think we need to celebrate women physicists, because we are out there. I don't know what to say. I am honoured to be one of them.”

How did it feel to learn she'd won the prize? “Crazy!” Strickland also praises the other 2 Laureates and their discoveries #nobelprize

She is clearly very proud and moved by receiving the most prestigious gong of the science world.

12:03 More about the new laureates

The award was actually announced ten minutes behind schedules, which is very-late-indeed in Sweden. I wonder if we will find out what caused the delay?

Göran K Hansson, Secretary-General of the Royal Swedish Academy of Sciences, as always impressively announced the laureates in five languages: Swedish, English, German, French and Russian. The Academy says Arthur Ashkin is awarded “for the optical tweezers and their application to biological systems” and Gérard Mourou and Donna Strickland “for their method of generating high-intensity, ultra-short optical pulses”.

I'll tell you more about their research shortly. We're now about to hear more from Strickland.

The official @NobelPrize account has handy explanations of the prize-winning techniques https://t.co/osxdyxy7a7

… Arthur Ashkin (USA) with the other half awarded jointly to Gérard Mourou (France) and Donna Strickland (Canada) for “groundbreaking inventions in the field of laser physics”. Congratulations!

The Local's Catherine Edwards and Nele Schröder are at the Royal Swedish Academy of Sciences where the 2018 Nobel Prize in Physics is to be announced at 11.45am. The Nobel Committee is usually on time, because Sweden.

15 minutes to go! We've just been told everything is running on time and reminded where we can get coffee – so far, so Swedish #nobelprize2018 pic.twitter.com/FKFGlrgx5v

International journalists have lined up to report on the #NobelPrize in #physics. The room is filled with a cacophony of different languages. pic.twitter.com/XTQiiyVdW6

When does the winner get told? Usually just a few minutes before the rest of us find out. However, it is often difficult to reach them due to the time differences, so sometimes they only find out when they wake up and turn on the morning news. And in 1989, the Nobel Committee accidentally called the wrong Norman Ramsey to inform an unsuspecting man (who was actually an economist) he had won the Nobel Prize in Physics.

“They had guessed maybe I might be in Washington DC. There was a Norman Ramsey there. And the chairman of the committee called him,” Norman-Ramsey-the-physicist once recalled in an interview.

From this ordinary phone, someone will receive an extraordinary phone call #NobelPrize #Physics pic.twitter.com/EpDoSdobIy

To date, 111 Physics prizes have been handed out to 207 laureates, two of whom were women. The gender imbalance was heavily debated last year, when none of the Nobel Prize winners in either category (Medicine, Physics, Chemistry, Literature and the bonus category of Economics) were women.

Göran K Hansson, the Secretary-General of the Royal Swedish Academy of Sciences, which is responsible for the Physics, Chemistry and Economics prizes, then said he would like to see more women laureates, but that they have to make their decision based on the nominations they receive – and apparently not enough female physicists get nominated.

Here's how the nomination process works. Thousands of members from the world of academia, science, parliamentary assemblies and previous Nobel laureates – chosen to represent as many countries and universities as possible over the course of time – submit candidates for the Nobel Prizes. The Nobel Committees of the awarding institutions then select the winners after much deliberation. The names of the other nominees cannot be revealed to the public until 50 years later and unfortunately I found out too late that you are not able to nominate yourself for a Nobel Prize.

The two women who did win the Physics Prize were Marie Curie (who also won the Nobel Prize in Chemistry – way to nick the limelight from the rest of us, Professor Curie) and Maria Goeppert-Mayer. Marie Curie working in a laboratory with her daughter Irene in 1927. Photo: AP

… and welcome to day two of Nobel Prize season. The two things everyone is asking in Sweden today are 1) Who will win the Nobel Prize in Physics and 2) When will Sweden form a government? Follow this blog to find out the answer to the first question in 45 minutes. Guiding you through this process is The Local Sweden's editor Emma Löfgren, with the help of our reporters Catherine Edwards and Nele Schröder. Hello from us!