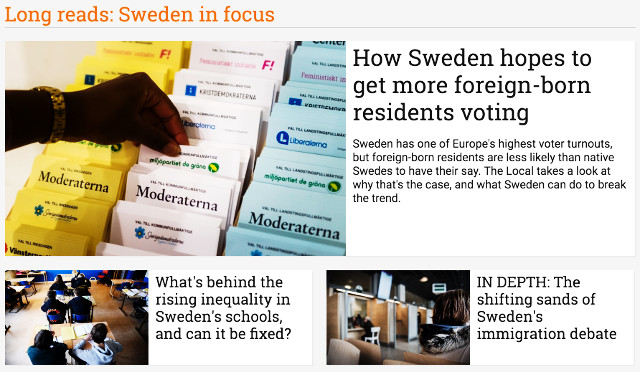 The Swedish Magazine Publishers Association highlighted The Local's Sweden in Focus series in the nomination.

Explaining the decision to pick The Local as one of four contenders for the 2018 Digital Publisher of the Year Award in the Popular Press category, the association says:

“The Local is editorially strong and has developed its digital concept impressively with a payment model and more audience interaction.”

The publishers association also highlights the important role The Local plays in giving the world an accurate picture of Sweden, making special mention of the in-depth Sweden in Focus series and an agenda-setting story about a deeply controversial court ruling.

The Local's Sweden editor Emma Löfgren is understandably delighted with the nomination.

“I’m very proud. We have worked very hard on making The Local even more relevant for our readers and giving them the kind of quality reporting that they will be willing to pay for. It’s gratifying to see that our industry has taken note.”

The Local’s managing editor Paul O’Mahony explains how the company’s nine European sites have all been moving in a similar direction.

“All across our network we’re working hard to get to the heart of our countries, strengthen our reporting, and deepen our relationship with our readers. This nomination will spur us on to keep honing our editorial output for our core audience of inquisitive internationals.”

For The Local’s CEO James Savage, 2018 has turned out to be an exceptional year.

“We've spent 14 years building The Local, but this past year has been a high point by any measure for our original Swedish site. The impact we had during this month's elections, both for our audience in Sweden and in the wider world, demonstrated that we are now an indispensable part of the media landscape. The success of our Membership programme shows that our readers believe this too. Accurate, insightful reporting about Europe in English was never needed more than it is today.”

The Local faces stiff competition for the award in the form of Baaam, an online feminist magazine for young women, anti-racism website Expo and KPWebben, a community site for children. The winner will be announced at an awards ceremony in Stockholm on November 7th.

The nomination caps an excellent week for The Local after the company’s Creative Studio was also shortlisted for a top native advertising award.