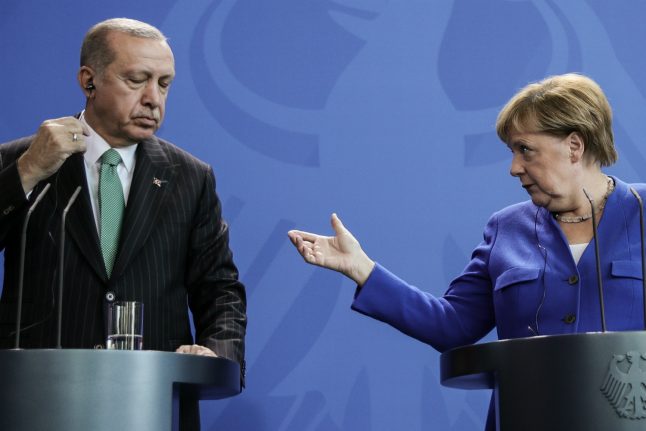 Erdogan was visiting the top EU economy, home to three million people of Turkish descent, in what German media have described as a charm offensive.

Merkel, under pressure at home for giving Erdogan the red-carpet treatment, said during a press conference there was “on both sides a joint strategic interest in good relations” despite “deep differences… especially in questions about a democratic, open society”.

But she stressed that continued dialogue was the best way to overcome those differences.

She also vowed to keep pushing for the release of five German citizens still being held in Turkey.

“I have called for these cases to be resolved as quickly as possible,” Merkel said, referring to the Germans who are detained.

Turkey is suffering economic turbulence aggravated by US sanctions stemming from a row with US President Donald Trump.

The three-day state visit is being held under tight security as thousands were due to protest against the Turkish leader under the banner “Erdogan Not Welcome”.

Merkel and Erdogan stressed the need to rebuild traditional ties that hit a historic low after a 2016 failed coup and subsequent crackdown in Turkey.

The two NATO allies agreed to jointly discuss the Syria crisis in a meeting next month with Russian President Vladimir Putin and Emmanuel Macron of France, Merkel said at a joint press conference.

But the gulf between them remained apparent on issues from press freedom to the fate of German or dual citizens being held behind bars in Turkey, and on whether Germany should extradite Erdogan's declared foes.

At the height of the crisis, Berlin had urged its citizens and companies to stay away from Turkey and pulled out its troops from NATO bases.

Trump in August raised tariffs on Turkish aluminium and steel, in retaliation for the detention of an American pastor on terrorism charges in Turkey.

On Turkey's economic woes, Merkel said that “Germany has an interest in an economically stable Turkey” with GDP growth.

Erdogan, who at the height of the diplomatic crisis had accused Berlin of “Nazi-like practices”, also struck a conciliatory tone, pointing to “win-win” business projects on the horizon.

On the question of open trade, he said, without mentioning Trump, that “we are of the same opinion as Germany” and that protectionism “spells a great danger for global security”.

However, he said Germany was doing too little to deal with thousands of Kurdish militants on its soil.

He complained that Germany was refusing to extradite followers of Muslim cleric Fethullah Gulen, whom he blames for the coup attempt.

Merkel said Germany regards the Kurdish Workers Party (PKK) as a banned militant organisation but was not convinced it should treat the Gulen movement the same way.

The Chancellor also said on Friday that she and the leaders of Turkey, Russia and France planned to hold a summit next month on the situation in war-ravaged Syria.

“We are in favour of a four-way meeting with the presidents of Turkey, Russia and France and myself because the situation (in Syria) is still fragile,” Merkel told reporters.

“We aim to do this in the month of October.”

Merkel said the talks were particularly urgent in light of the fraught situation in Syria's rebel-held province of Idlib.

Ahead of Erdogan's arrival, Turkey handed Germany a list of 69 people it wants extradited, among them alleged PKK and far-left activists and Gulen followers.

Also on the list was journalist Can Dundar, who has lived in Germany since 2016. He is evading a jail sentence for his Cumhuriyet newspaper's reporting on alleged secret Turkish arms deliveries to Islamist rebels in Syria.

Dundar dropped plans to attend Friday's press conference, claiming Erdogan had threatened to boycott it. Dundar said he did not want to “be the news” and spark a new diplomatic crisis.

But Erdogan charged that Dundar “is an agent, he is a person who has disclosed state secrets”.

“No country would allow state secrets to be disclosed,” he added. “It is our natural right to want the extradition of a guilty individual.”

Mass protests were planned against Erdogan Friday, with demonstrations also expected Saturday when he opens a mosque in the city of Cologne.

More than 4,000 police were deployed across central Berlin, where helicopters buzzed in the sky and snipers guarded the roof of the Adlon Hotel where Erdogan was staying.

German Green party politician Cem Ozdemir, who has Turkish roots, said Erdogan should have been received with less pomp, perhaps for a working-level visit.

He told AFP that, even though a rapprochement was good news, those Turkish citizens “who wish for democracy and human rights… do not deserve to be abandoned by us”.