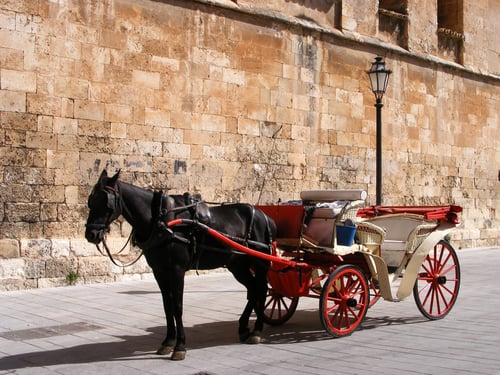 When Palma city hall introduced a measure during the heatwave this summer to stop horse-drawn carriages during the hottest part of the day  – between 12 noon and 5pm on days when heat alerts were in place – it caused fury amongst carriage drivers who said their livelihoods were threatened.

It was, they argued, a long tradition and they followed regulations imposed by the town council to ensure the horses were well cared for. Despite calls by local animal rights groups and pledges by councillors to tighten animals rights legislation concerning the horse-drawn rides, a carriage ride is still a popular activity among tourists.

But Elisa Allen, who recently visited the island, argues that it's time to put a stop to it. Here she explains why:

Two years ago, a horse used in Mallorca's carriage industry was killed when he suddenly bolted and crashed into a wall, panic-stricken, after being startled by a tourist who wanted to pet him. This accident not only cost the horse his life but also put bystanders at risk of serious injury.

Yet, it's far from an isolated incident. Wherever there are carriage rides, there will be accidents – and lives will be endangered. Horses startle easily and are extremely sensitive to loud and unexpected noises, and busy city streets have plenty of both, which often leads to accidents. The honk of a car horn – or even just an insect bite – can be enough to trigger a horse to bolt.

In New York City, a frightened horse collided with some parked cars and flipped his carriage over onto himself, becoming pinned under the wreckage. He survived but was led off limping and bleeding from a leg wound. In July 2011, in New York City, three tourists and a carriage driver were hurt when a taxi rear-ended a horse-drawn carriage near Central Park. One passenger was thrown to the pavement, and the driver sustained a serious head injury. The horse was knocked to the ground, and the carriage fell on top of him. In Rome, a 17-year-old horse named Birillo fell and broke his leg on a cobbled street after being hit by a lorry. He writhed in agony for four hours before a veterinarian finally arrived to euthanise him. Another horse died after being struck by a car.

But, despite such incidents and the danger of more to come, exhausted horses in Mallorca are still being forced to pull carriages through the island's busy tourist spots of Palma, Alcúdia, and Sant Llorenç des Cardassar even in the summer months, when temperatures regularly reach 40 degrees, causing many to collapse from heat exhaustion. In addition, pounding the pavement day in and day out takes a considerable toll on horses' legs, hooves, backs, and lungs, and they commonly suffer from respiratory ailments as a result of breathing in exhaust fumes.

In response to similar horse-drawn carriage accidents, many cities, including Barcelona, Beijing, Las Vegas, London, Paris, Tel Aviv, and Toronto, have banned carriage rides, making the simple and ethical choice to retire their beleaguered horses and relegate the carriages to the dustbin of history, where they belong. Mallorca's cities must follow suit. They could replace the use of horses with modern, eco-friendly, electric-powered antique cars, which would retain the nostalgic flair but eliminate the cruelty to horses. “We were dismayed to see the images,” the head of the government’s directorate-general for animal protection, Sergio Garcia Torres, told AFP.

“It is a blatant case of animal abuse.”

Footage published Thursday by Cruelty Free International shows appears to show animals at the Vivotecnia animal testing facility being cut into apparently without having received anaesthetics.

Staff were also filmed swinging dogs and rats around and in one clip someone is drawing a face on a monkey’s genitals as the animal is pinned to a table.

The group said the footage was taken by a whistleblower who worked at the facility, which is on the outskirts of Madrid, between 2018 and 2020.

“There can be no doubt that such gratuitous cruelty causes unnecessary distress and suffering,” the animal rights group said in a statement.

“It is also unlawful.”

Police and public prosecutors said Monday they had opened separate investigations into Vivotecnia, which carries out experiments on animals for the pharmaceutical, cosmetic and food industries.

The company’s phone number was no longer working on Monday and its web site was down for maintenance.

In a statement cited by Spanish media, Vivotecnia chief executive Andres Konig said he was “shocked” at the images. But, he added, they did not “demonstrate the day-to-day reality at Vivotecnia”.

Following the outcry caused by the release of the footage, the Madrid regional government on Sunday temporarily halted activity at the animal testing facility.

Animal rights political party PACMA has filed a lawsuit against the managers of the company and urged the government to step up its supervision of animal testing.

“It’s a very opaque world and it could be that this is happening regularly without us knowing,” PACMA president Laura Duarte told AFP.

The Vivotecnia laboratory animals were examined by veterinarians and are being moved to other facilities.