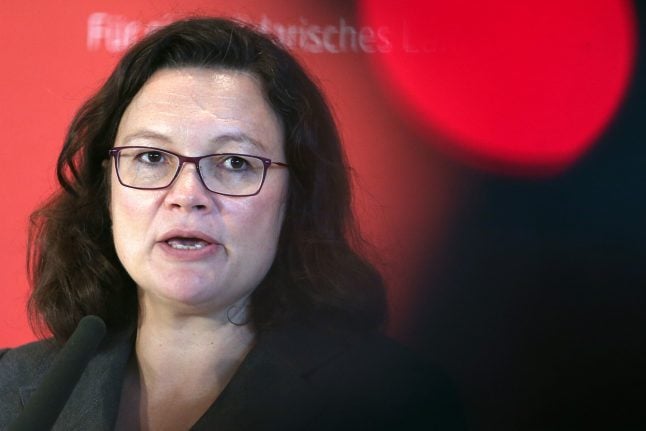 Chancellor Angela Merkel (CDU) agreed to renegotiate the future of Hans-Georg Maaßen, former President of the Office for the Protection of the Constitution, after a call from SPD leader Andrea Nahles.

Nahles, along with Chancellor Angela Merkel (CDU) and CSU leader Horst Seehofer, had agreed on Tuesday to sack Maaßen as head of the Office for the Protection of the Constitution. But as part of the deal he was promised a position as secretary of state in the Interior Ministry.

“The Chancellor considers it right and appropriate to reassess the issues at stake and to find a viable joint solution,” government spokesman Steffen Seibert said on Friday.

Meanwhile, Seehofer also said later on Friday that he would not rule out a new consultation with Merkel and Nahles about the Maaßen case.

“I think a renewed consultation makes sense if a mutual solution is possible. This is now being considered,” Seehofer told the DPA on Friday.

The decision was sparked after Maaßen gave comments in a newspaper interview on xenophobic incidents in Chemnitz. He had questioned the authenticity of amateur video footage, seemingly contradicting Merkel, and was also accused of having questionable links to the far-right.

There was a huge resistance to the deal within the Social Democrats (SPD), with former party leader Sigmar Gabriel calling the move to transfer Maaßen as “crazy”.

“I am of the opinion that the leaders of the coalition should meet again to discuss the important but very different concerns of the coalition partners,” Nahles wrote in a letter to Merkel and Seehofer, which was initially reported by Spiegel Online.

The SPD leader successfully pushed for Maaßen’s dismissal, whose suitability in the fight against far-right extremism was doubted by the party.

Federal Interior Minister Seehofer, who, unlike Merkel and Nahles, supported Maaßen, planned to take him in return for the position of SPD State Secretary in his ministry.

Seehofer emphasized that he wanted Maaßen’s expertise in the fight against terrorism. On Thursday he praised Maaßen as a “competent, honest employee”.

With his headstrong decision, however, the CSU leader brought the SPD into severe turbulence – there were demands at the grassroots level to end the grand coalition.

“The consistently negative reactions from the population show that we were wrong,” Nahles wrote.

“We have lost confidence instead of restoring it,” she said. “That should be a reason for us to pause together and rethink the appointment.”

The call from Nahles came during a turbulent time in German politics.

On Friday, a poll found that the Alternative for Germany had overtaken the SPD for the first time as the second strongest party in Germany.