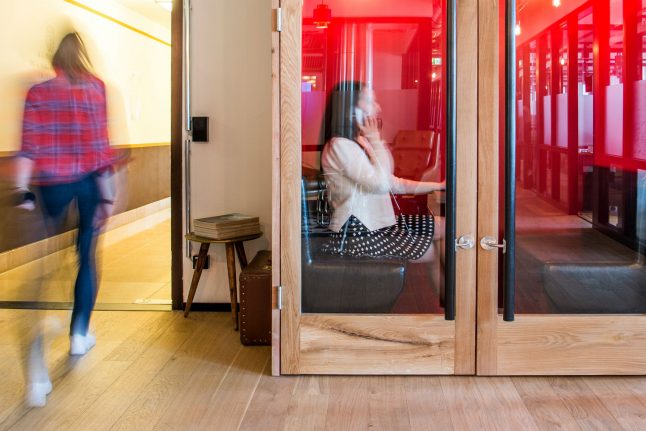 A conference room for Mindspace in Berlin. Photo: DPA

Shared office spaces with industrial and minimalistic design, conference rooms and meeting places used to be favoured by West Coast creatives who ditched style in favour of connections, innovation and economization.

But the audience for such work places has recently expanded. A growing number of suppliers of co-working spaces, such as New York’s WeWork, or Israel’s Mindspace have established trendy, shared office spaces in German cities, as well as cities such as New York, London and Amsterdam.

SEE ALSO: What are Berlin's most affordable co-working spaces?

Space for businesses as well as individuals

Co-working-space vendors provide businesses with almost everything. It's not only about desks, telephones, conference centres and high internet speeds, but all sorts of services: coffee machines and water fountains, as well as microwaves, bike spaces, cleaning and reception staff.

According to José Martínez, director of the Frankfurt branch of BNP Paribas Real Estate, the co-working industry took off in Germany in 2017. Martínez says eleven lease contracts have been agreed in Frankfurt, which is more than in the previous nine years combined.

Furthermore, large spaces are being rented out. In Frankfurt’s Eurotheum tower, around 3300 square metres, including 450 work spaces, went to Mindspace. The development has surprised Martínez. “Until 2016, the phenomenon played almost no role in Frankfurt,” he says. The trend towards this form of working environment has sharply increased across the country. Statistics from the consulting agency Colliers show that, in 2017, the amount of co-working offices in the seven biggest German cities increased fivefold. This accounts for five percent of the market volume.

There are more than just financial grounds to hire shared office spaces. Many established companies want to present themselves as cool employers in the creative field.

According to the German Federal Association for Start-Ups, some large companies rent co-working offices to benefit from the proximity to start-ups. Some vendors use this argument as a selling point for co-working. Martínez explains that, in Frankfurt, it is the traditional, large companies which are the largest demanders of co-working spaces, ahead of start-ups. Microsoft has a contract with WeWork, and Samsung with Mindspace.

However, businesses have more than just their image to worry about. Due to the economic upswing, offices in attractive parts of German cities are scarce.

According to the Central Properties Committee (ZIA), only five percent of office space in the largest German cities is empty, which is half as many as in 2010.

In the outskirts there are plenty of free office spaces, yet many companies prefer the city centre, and so avoid co-working spaces.

The exception is, perhaps, Berlin, whose start-up scene grew from the centre of the city, and which has many prominent co-working spaces devoted to them.

Is it worth it?

Martínez argues that for flexibility, many people who rent co-working spaces “pay exceptionally high rents and are concerned with the design of the office”.

Companies in co-working centres have only five to six square metres per employee, as they must factor in communal space.

At WeWork, a desk in the central offices in Frankfurt costs €320 per month. And that is only guaranteed with availability. To have your own guaranteed space, it costs around €400, while a private office for a team can cost from €560 to over €600.

Yet in Berlin and smaller cities, so-called flexible desks, where an co-worker can plant there laptop wherever there is available space, can go for as little as €50 per month.

A study by Colliers suggests that the influence of the creative field as a ground for renting co-working space has diminished. Rather, arguments concerning availability, location and flexibility prevail.

The future of co-working

Will co-working office space become the norm in the German working world? According to Kiese, digitalization and the trend towards flexible working will increase the co-working tendency.

She considers this as the “beginning of a wave of expansion.”

Martínez, meanwhile, argues that the situation can quickly change in a weaker economy.

“Businesses with flexible contracts are the first whose contracts will be terminated,” he says. “But an end to the boom is not yet in sight.”