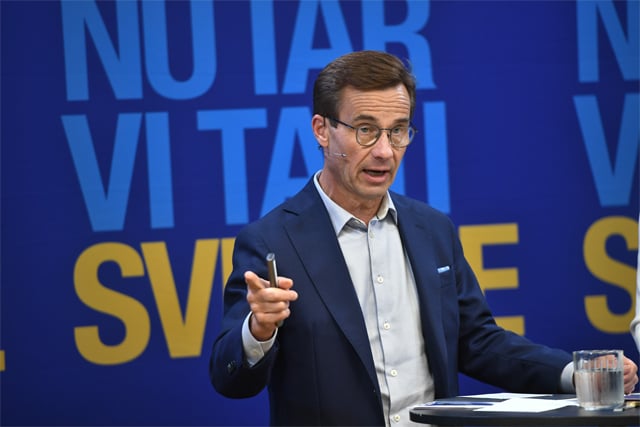 Kristersson's campaign ahead of the September 9th election has focused on limiting Sweden's generous benefits to incite people, in particular immigrants, to enter the labour market.

“We need to focus on jobs and integration so we can prioritize the core of the welfare system,” including universal health care and education, Kristersson said as he presented his party's election platform. He said Sweden faced “many big challenges”.

“We have acute problems like gang shootings, healthcare queues, failing schools and people living off of benefits. And all of that needs to be solved. But a government also has to create hope for the future; instill faith that we can create something even better in Sweden, a society that creates even more Ikeas and Spotifys.”

Intellectual and analytical, with an economics degree in his pocket, Kristersson is seen as a talented communicator. That skill has been frequently tested since the party swung its immigration policy 180 degrees: from former Moderate prime minister Fredrik Reinfeldt's 2014 “open your hearts” speech to Swedes on the eve of Europe's migrant wave, to today's restrictive policies as the party vies for the same voters as the far-right.

Apart from a stint in the early 2000s as a communications director, Kristersson has spent his entire career in the Moderates after founding a youth branch at his secondary school. He rapidly became a rising star.

He was elected head of the national youth wing in 1988, spearheading a neo-liberal faction. But in 1992, he lost a bitter leadership battle to Reinfeldt, also a neo-liberal but more conservative – who went on to become prime minister from 2006-2014.

That loss, and the rift the rivalry created, affected Kristersson deeply, impressing upon him the importance of putting the team first, observers say.

Kristersson entered parliament in 1991. He later served as city councillor in his hometown of Strängnäs and in Stockholm, as social security minister under Reinfeldt from 2010-2014, and then as shadow finance minister.

In October 2017 he took the Moderates' reins after his predecessor Anna Kinberg Batra was ousted by a faction of the party for saying she was ready to negotiate with SD on a case-by-case basis.

READ ALSO: Where did it all go wrong for the Moderates' ousted leader?

Kristersson has insisted he won't negotiate with SD, which is neck-and-neck with the Moderates in the polls behind the Social Democrats. He has struggled in the campaign, failing to resonate with voters as polls showing him losing ground.

Kristersson has vowed to form a government with three other centre-right parties. But the so-called Alliance and Löfven's left-wing bloc each look poised to win around 40 percent of votes, sparking fears of a parliamentary deadlock with no bloc holding a majority and neither willing to accept SD's support.

Kristersson exudes “nice guy” vibes: smart, humble and reasonable, easygoing and open to discussion, keen to delegate, a winning smile. Those qualities will be key in the thorny negotiations that will ensue if he is called to form a coalition government.

But critics question whether he has the leadership to govern at a time when Sweden faces rising polarization, mounting nationalism, populism and information wars, a more assertive Russia and a possible economic downturn.

His detractors call him a “coffee break politician”: all talk, no action.

According to Sweden's paper of reference Dagens Nyheter, some Moderates have internally criticized his party leadership for acting “too much like a right-wing think tank” rather than a party focused on results.

Despite his youthful and bespectacled boy-next-door appearance and demeanor, Kristersson is no stranger to controversy.

A runner and hunter, Kristersson is married and the father of three daughters adopted from China.