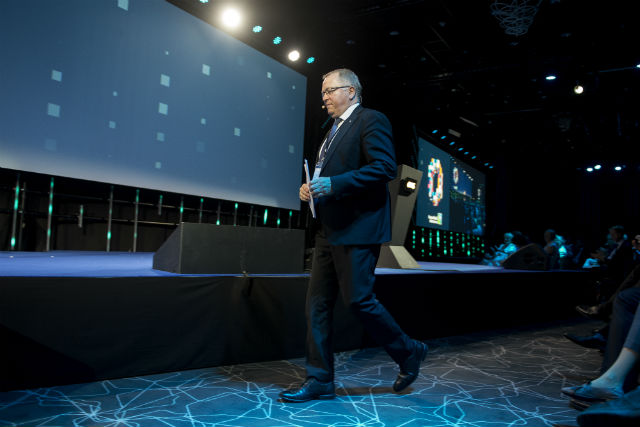 Equinor hief executive Eldar Sætre skips onto stage at the Offshore Northern Seas conference in Stavanger. Photo: Carina Johansen/NTB Scanpix
The is around the same number as the company has drilled in the near 50 years since it was founded in 1972.
“We need to start now,” Arne Sigve Nylund, Executive Vice President for Development and Production Norway, said in a statement released on Tuesday, the second day of the Offshore North Sea (ONS) conference in Stavanger.  “After 2022, there are currently few big projects remaining.”
The company, which is two-thirds owned by the Norwegian government, confirmed on Monday that its giant Johan Sverdrup oil field would start producing in November next year.
At the same time, it increased its estimate of the field’s size from 2.2bn-3.2bn barrels of oil equivalent (Bboe) to 2.1-3.1 Bboe.
The field, discovered in 2010, is the largest new discovery in the North Sea in more than 30 years.
But the company said that it now planned to drill between 20 and 30 exploration wells a year on the Norwegian Continental Shelf in the hope of finding other significant new fields.
“Active exploration on the NCS is vital to succeed in renewing the shelf,” Tim Dodson, executive vice president for Exploration, said.
“We are making two important moves: We have developed a strategy for more gas exploration. We see it as necessary to regularly test a few of what we call ‘game changing wells’ in order to explore the NCS to its full potential.”
At a press conference on Monday, Chief Executive Eldar Sætre also warned of the shortfall of big new development projects for the company after 2022.
It was vital, he said, to keep an open mind over the far-northern Lofoten and Vesteralen archipelagos, which are currently closed to exploration for ecological reasons.
“Resources are there and the Norwegian continental shelf is mature. We need to continue to explore,” he said. “The psychology might be different a little bit down the road when we are really looking for new opportunities.”
The company also on Tuesday said it hoped to reduce greenhouse gas emissions by building a floating offshore wind farm to help power the Gullfaks and Snorre oilfields.
The 11 turbines, called Hywind Tampen, would supply 88MW and meet around 35 percent of these fields’ annual power demand.
“This could be the first time an offshore wind farm is directly connected to oil and gas platforms,” Equinor said in a press release.
The company changed its name from Statoil earlier this year to signal a shift towards renewable energy production.
READ ALSO: 'Call me Equinor': Statoil changes name

Equinor, which is 67 percent owned by the Norwegian state, said that its net profit rose to $1.4 billion between July to September this year, compared to a loss during the same period in 2020, partly due to asset write-downs.

But the profit figure was well below analyst expectations of $2 billion.

However, total revenue hit $23 billion, narrowly beating expectations of $22 billion, according to analysts surveyed by Factset.

The number was also more than twice the revenue of the same period last year, when many businesses were devastated by the Covid-19 pandemic.

Energy prices have surged recently as the global economy recovers from the pandemic, and the northern hemisphere heads towards winter.

Chief executive Anders Opedal said that “the global economy is in recovery, but we are still prepared for volatility related to the impact of the pandemic”.

“The current unprecedented level and volatility in European gas prices underlines the uncertainty in the market,” he said in the statement.

“Equinor has an important role as a reliable energy provider to Europe and we have taken steps to increase our gas exports to respond to the high demand.”

Equinor’s average price of oil per barrel reached $69.2 in the third quarter — up from $38.3 a year earlier.

Still largely oil-based, the company said in June it plans to invest $23 billion in renewable energy by 2026.