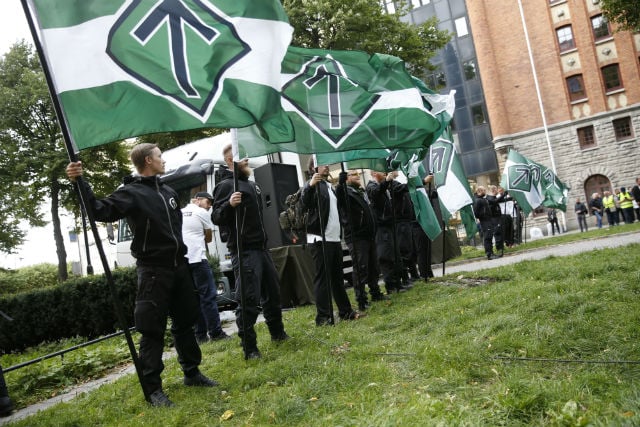 NMR demonstrators take their position in Kungsholmstorg Square. Photo: Fredrik Persson/TT
Under the close watch of a detachment of police in riot gear, activists from the Nordic Resistance Movement (Nordiska Motståndsrörelsen or NMR) gathered in a square in the Kungsholmstorg square in the Swedish capital.
At the edges of the square, hundreds of counter-demonstrators gathered behind a security cordon, shouting slogans and banging the metal barriers in a bid to drown out the NMR speeches.
Among the protesters was Culture Minister Alice Bah Kuhnke, who was born to a Gambian father and a Swedish mother.
Both the rally and the counter-protests ended peacefully without incident,  an AFP correspondent said.
NMR, which was founded in 1997, is a political party which openly promotes a racist and anti-Semitic doctrine and has been described as the country's most violent Nazi organisation by Swedish anti-racism magazine Expo.
Although the group counts a core membership of barely 80 members, it was more active than ever before in 2017, the magazine said earlier this year.
The group was initially expected to march on a route around the Stockholm island of Kungsholmen, but its leaders complained that Sweden's police had not allowed them to march the full route they had proposed, and so instead remained at the Kungsholmstorg square.
“That's no problem for us, whatever happens we will take care of it,” Lars Byström, a spokesman for the Stockholm Police told The Local after the decision.
The demonstration began with of a phalanx of male NMR supporters holding banners, while music played from a set of loudspeakers.
Later, NMR representatives began reading out a list of “traitors of the people”, which include large numbers of politicians from both left and right.
According to Swedish broadcaster SVT, there were scarcely a hundred neo-Nazi demonstrators, far less than the upper limit of 3,000 for which the group had applied for permission. NMR leader Simon Lindberg. Photo: Fredrik Persson/TT
Three NMR activists were also seen waving a flag from a rubber motorboat outside Sweden's national parliament, while playing a pre-recorded speech from a loudspeaker.
Photo: Fredrik Persson/TT
A counter-demonstration in the nearby Kronobergsparken drew around 200 protestors, according to police.
Photo: Fredrik Persson/TT
Earlier in the day, the centre-right Centre Party, which is trying to position itself as an anti-Nazi party, sent a boat to the waters of the square, decorated with LGBT rainbow flags and the Centre Party logo, which played loud schlager music.
According to a press release, the party had loaned the boat out to a lesbian couple, Ellinor and Marielle, in order to “celebrate love and openness”. The couple married eachother while protesting against the NMR march. Photo: Fredrik Persson/TT
The Centre Party was not the only political party to position themselves against the neo-Nazi protesters.
Alice Bah Kuhnke, Sweden's Green Party culture minister, attended the counter-demonstration alongside handball player and feminist blogger Linnea Claesson and the holocaust survivor Hedi Fred.
She told TT that the Green Party wanted to change public order laws so that police would be better able in future to prevent similar neo-Nazi demonstrations from taking place.
Photo: Fredrik Persson/TT
Liberal Party leader Jan Björklund was also at the counter-demonstration.
“My mother came to Sweden as a refugee during the Nazi period. She died last year and I feel almost thankful that she never had to experience this,” he told the Expressen newspaper. “We must stand up for freedom and democracy.”
According to Byström seven activists were picked up by the police on Friday night and sent back to their homes on Saturday morning so they could not take part in the march.
“We made a judgement that they represented a risk for order and security,” he told TT.
He would not give any details as to who the people were or which part of Sweden they came from.
For the first time in its 21-year history, the NMR will present a list of 24 candidates to run in September 9 elections, although the party is unlikely to pass the 4.0 percent threshold to enter parliament.
One of its candidates is facing a police investigation for raising a flag on April 20 in honour of Adolf Hitler's birthday.
Writing on Facebook on Saturday, Swedish Prime Minister Stefan Lofven said he wanted to ban neo-Nazi organisations.
“Democracy has always had the right to protect itself from the forces willing to resort to violence to destroy it,” he said.
Url copied to clipboard!