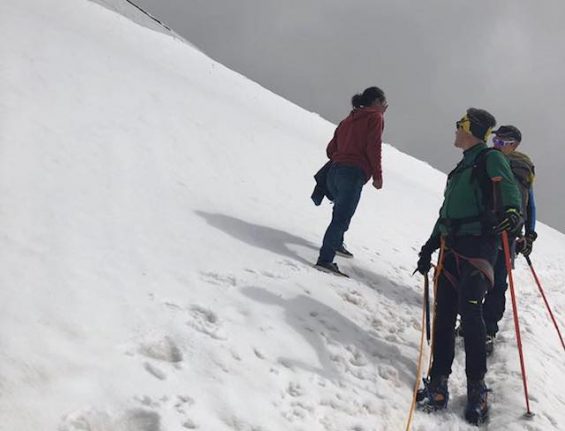 How not to climb mountains in Italy. Photo: Victor Vicquery via CNSAS/Facebook

Mountaineers were shocked this week to encounter a man dressed “as if he were taking a stroll in the city centre” tackling the Breithorn, a 4,164-metre peak that straddles the border between Italy and Switzerland, said Italy's National Alpine Cliff and Cave Rescue Corps (CNSAS).

Posting a picture of the poorly prepared climber on Facebook, rescuers said that others had advised the man to turn back, but he continued regardless.

“Mountains are extraordinary places, but they're not a city park or sandy beach,” CNSAS wrote in a post shared by thousands of Facebook users. “Let's respect them!”
Rescuers urged would-be mountaineers to show a little more sense, namely by making sure they're properly equipped, aware of their own limits and not afraid to turn back if necessary.
Encouraging climbers to be better prepared is the only way to reduce “the thousands of accidents that take place in our mountains every year and avoid so many tragedies,” CNSAS said.
The rescue service knows what it's talking about: just this week its members helped search for missing hikers caught in flash floods in a river gorge in one of Calabria's national parks. Ten people died in the flooding, including one of CNSAS's own volunteers who had been working as a guide.
Despite warnings that only experienced hikers should tackle the challenging route, locals reported that it wasn't uncommon to see visitors attempting the hike in flipflops and beachwear.
READ ALSO: How to stay safe while travelling in Italy