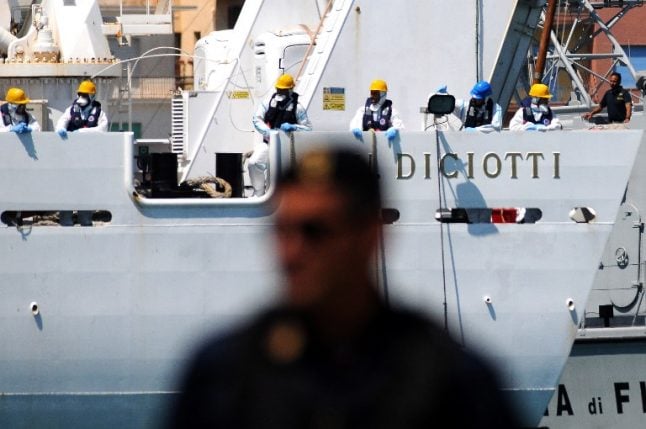 The coastguard ship Diciotti lands in Sicily after an earlier mission in July. Photo: Alessandro Fucarini/AFP

The migrants have been blocked at the Sicilian port of Catania on the vessel Diciotti since Monday night, as the Italian government refuses to allow them to disembark without commitments from the EU to take some of them in.

High-level officials from a dozen EU member states were meeting in Brussels on Friday to discuss what EU officials said was the broader issue of the disembarkation of migrants rescued at sea. EU sources said they did not know whether the delegates would strike a deal on the Diciotti during their talks.

“The European Union has decided to turn its back on Italy once again,” Deputy Prime Minister Luigi Di Maio wrote on his Facebook page on Friday, adding that his country had no choice but to “take a compensatory measure in a unilateral way… we are ready to reduce the funds that we give to the European Union”.
“They want the 20 billion euros ($23 billion) paid by Italian citizens? Then let them demonstrate that they deserve it and that they are taking charge of a problem that we can no longer face alone. The borders of Italy are the  borders of Europe,” he added.

EU figures for 2016 say Italy contributed just under €14 billion to the EU budget — less than one percent of its gross national income — while the bloc spent €11.6 billion in Italy.

READ ALSO: 'No one lands in Italy without my permission': Salvini resists calls to let rescued migrants disembark Di Maio, who heads the anti-establishment Five Star, said Italy didn't want the “mickey taken out of us by the union's other countries” on the distribution of migrants.

“The EU was born of principles like solidarity. If it is not capable of redistributing 170 people it has serious problems with its founding principles,” he said in an interview with state broadcaster Rai.

EU officials hit back at Di Maio's “threats”, which they said were unhelpful.

“Unconstructive comments, let alone threats, are not helpful and they will not get us any closer to a solution,” European Commission spokesman Alexander Winterstein told a briefing. “The EU is a community of rules and it operates on the basis of rules, not threats.”

Winterstein said the European Commission urged “all the parties involved to work constructively together to find a swift solution for the persons on board in the spirit of good cooperation”.

Friday's meeting follows Interior Minister Matteo Salvini's decision to leave the majority of the migrants on board the Diciotti after they were rescued on August 15th. His only concession has been to allow 27 unaccompanied minors off the boat on Wednesday.

No deal was struck about the Diciotti migrants at the talks, as a source at  the European Commission said “this was not a meeting where decisions were taken”.

However the source said they discussed “the need for a shared and rapid solution for the migrants on board of the Diciotti as well as those most recently disembarked in Spain and Malta”.
“Some of the migrants have started a hunger strike over their treatment, Italian media reported. The coastguard told AFP they had “refused to eat breakfast” on Friday.

Italy's new populist government has taken a hard line on migration since coming to power, demanding the EU do more to share the responsibility of caring for migrants who land on its shores as one of the main entry points to  Europe.

Salvini said in an interview with Corriere Della Sera that the only way the migrants would be let off the Diciotti was “with a nice big airplane from one Europe's capitals landing in Catania”.

“Europe needs to understand that the Italian government is irritated. We've had enough with their many words and few results,” he said, claiming that the other nations had only taken in 12,000 of the 35,000 people they had promised.

Opinion polls suggest that Salvini's stance has boosted his anti-immigration League party's approval rating to around 30 percent — over 10 points up from its showing in the March election — and is now level with the Five Star Movement, with which it has governed Italy since the start of June.

However, according to Salvini's own ministry, migrant arrivals are more than 80 percent down on the same period last year, with just over 19,500 arriving up to August 23rd, compared to to 98,000 in 2017.

In France, meanwhile, the presidency called for a “co-ordinated, long-term European mechanism” to distribute migrants that would include Italy. “There are forces in Italy that are looking to co-operate, we want to believe Italy wishes to play the game,” the Elysee palace added.
READ ALSO: Sicilians bring arancini to port to bid rescued migrants welcome