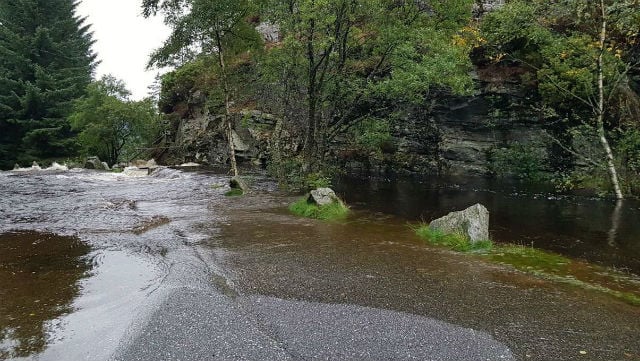 The floodwater after the temporary dam burst. NTB scanpix/Bergen municipality
“The water is just gushing out here. It is literally filling the whole valley. It's really a disaster area here,” said Trygve Opheim, a journalist for the local Bergens Tidende newspaper.
He said that a temporary construction set up during the rehabilitation of the dam at the Munkebotsvannet lake had split open, and that an earth rampart built to keep control of the water was also about to break.
“If the dam breaks, we have about 20 minutes to go before large amounts of water will come down here. How much we are talking about, we do not know exactly, but we have been informed that there may be material damage to both roads and buildings,” Ivar Kvant, deputy head of the local police told the Bergensavisen newspaper.
He said three cars had been swept away by the flood, with one likely to be pushed into the lake.
Bergen municipality has set up a reception centre for all those evacuated. Parts of the Bergen district of Eidsvåg risk being flooded and both the Eidsvåg tunnel and the Glaskar Tunnel on the E39 had been closed on Wednesday evening.
Lars Grøtte, head of the dam safety division at the Norwegian Water Resources and Energy Directorate, said that while the Munkebotsvatnet contained 1.1m cubic meters of water, the two catch ponds had considerably less.
Url copied to clipboard!