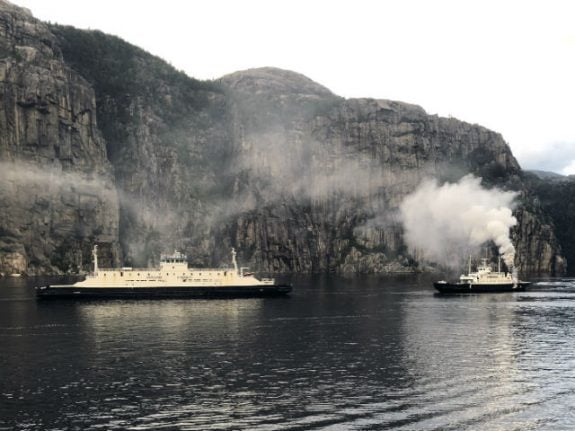 The burning ferry is being towed to land where firefighters can continue their work. Photo: Rebekka Hagen Andreassen/NTB Scanpix
The 65-metre-long Eid tourist ferry caught fire shortly after 8pm on Friday night near the popular Pulpit Rock tourist destination. News of the fire quickly spread over social media.

Nearby leisure sailing vessels and motor boats rescued the 54 passengers on board, with a single trimaran sailing vessel taking close to 20.
“Eid has had an engine failure with overheating, so the ferry has been evacuated,” Johan Mannsåker, duty officer for at the Norwegian rescue services command centre for Southern Norway, told the local Stavanger Aftenblad newspaper.
“Several boats are on their way to support and help with the evacuation. The fire service has sent out specialists in fire-fighting at sea.”
Those evacuated are being sent to the village of Oanes where they will be met by police officers and medical staff. So far no injuries have been reported.
According to the local police, the burning ferry was by 9pm being towed out the fjord by another ferry, MF Finnøy.
“The fire is still not under control, but the ferry is being brought to land so that the fire services can continue their  extinguishing work on land,” Mannsåker added. “We must find a suitable place not too close to buildings or other cars.”
The ferry, owned by Fjord1, has a capacity to carry 146 people and 50 passenger cars.
Url copied to clipboard!