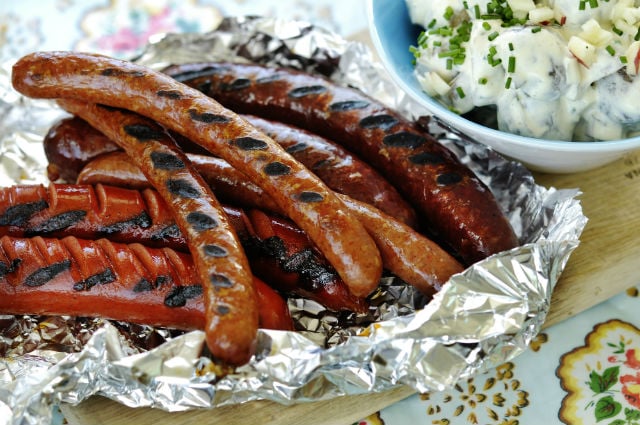 'Varmkorv' sausages are a summer tradition in Sweden. Photo: Jurek Holzer / SvD / TT
The summer has seen Sweden hit by the worst wildfires in more than 50 years, prompting authorities to put in place bans on all kinds of open fire, including barbecues across the country.
But after heavy rain fell over much of the country in recent weeks, the risk of new wildfires has now reduced significantly.
The ban was lifted in Dalarna and Gävleborg, two of the areas worst hit by this year’s terrible fires, on August 14th and July 31st respectively.
It was lifted in Stockholm County, Örebro, Västmanland and Värmland on August 15, in Kronoberg and Södermanland on August 13th, and in Jämtland on August 10th.
The ban remains in place in several areas, however, particularly in southern Sweden —  with Skåne, Blekinge, Halland, Västra Götaland, parts of Jönköping, Gotland and Uppsala still upholding a ban fires in forests and public spaces.
From August 13th, people in Skåne and Halland have been allowed to barbecue on private land, and on August 14th, Västra Götaland and Öster Götaland gave a similar go-ahead.
People in Blekinge, Kalmar, Gotland, and Uppsala have already been allowed to barbecue on private property for several weeks.
Some areas are giving more detailed advice to residents, so it is worth checking on local council and regional websites before setting up a barbecue. People in Södermanland are, for instance, banned from using disposable barbecues, while those in Västernorrland and Halland are advised to keep their barbecues on a platform lifted off the ground.
READ ALSO: The best places to have a safe barbecue in Stockholm