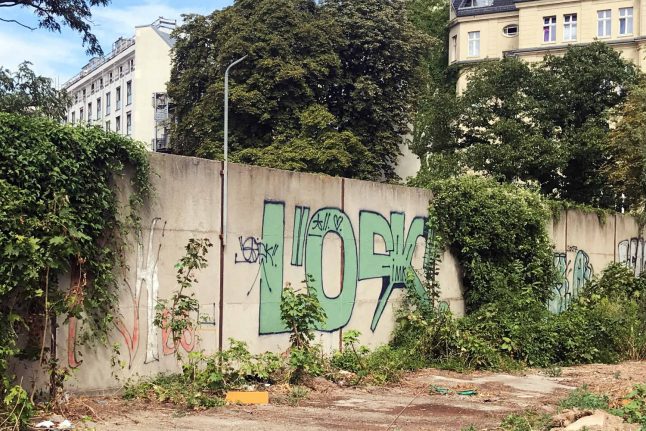 The newly discovered section of wall in Berlin-Mitte. Photo: DPA

When Ephraim Gothe (SPD), a district councillor in Berlin-Mitte, set out in June for a walk-and-talk event with voters in his local area, little did he know that he was about to make quite a discovery.

Gothe’s remit includes building and development, so he is normally more concerned with finding space for new structures, rather than digging out old ones.

On this occasion, though, he and his fellow walkers stumbled across a section of one of Berlin’s most famous historical structures. Hidden among the bushes on the edge of the abandoned Südpanke-Park stood a forgotten section of the Berlin Wall.

“I was totally surprised that there were still undiscovered bits,” Gothe told DPA.

While most of the Wall has now been destroyed, several sections remain at tourist sites such as East Side Gallery and the Berlin Wall Memorial, while other, forgotten sections are found from time to time.

FOR MEMBERS: Why was the Berlin Wall built in the first place?

The section at Südpanke-Park, which fittingly lies in the shadow of the enormous headquarters of the BND, Germany’s intelligence service, was not immediately recognisable as part of the Berlin Wall, the Tagesspiegel reported.

After a survey by the Berlin Wall Foundation, the structure was identified as part of the smaller, preliminary wall which separated the death strip from East Berlin, rather than the more recognisable outer wall which directly bordered the west of the city.

With surviving bits of the wall now few and far between, the section was immediately put under protection as a historic monument by the district council, the Tagesspiegel reported.