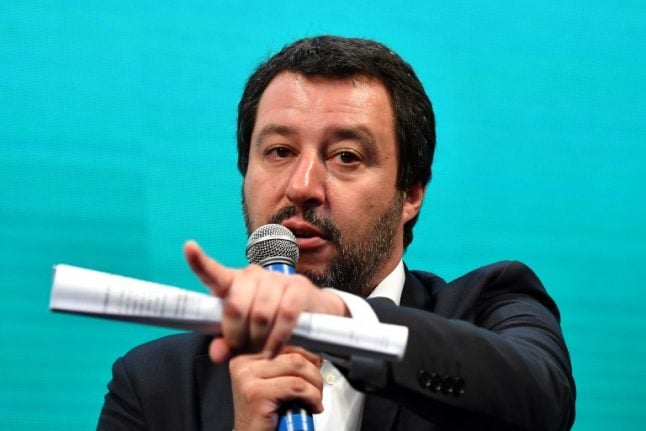 Matteo Salvini at a meeting with the Italian Association of Commercial Businesses in June. Alberto Pizzoli/AFP

Minister of the Economy Giovanni Tria wants to eliminate the “Renzi bonus” – so called because it was introduced by former prime minister Matteo Renzi – on the grounds that it costs the government an estimated 9 billion euros a year and is complicated to administer, according to Corriere della Sera.

But Salvini has dismissed reports by news outlets that the populist Five Star Movement-League coalition government has decided to scrap the bonus and raise VAT.

“I'm sorry I have to chase down the newspapers' rumours,” he said. “They're clearly false and serve only to fill the pages of the dailies in the month of August.”

Salvini, leader of the far-right League party, and his co-deputy prime minister, Five Star Movement (M5S) head Luigi Di Maio, committed themselves in March to slashing taxes and introducing a limited basic income to Italy, the latter of which was a key element of M5S's campaign platform in the lead-up to Italy's spring elections.

“We’re the party of change,” Salvini reportedly told Tria during their key meeting on the government's budget plan that took place yesterday at Palazzo Chigi, the seat of the Italian government. “We certainly can't introduce a VAT increase.”

“VAT will not increase… citizens should stay calm because we won't put our hands in their pockets”, Di Maio promised voters as he left the summit late yesterday evening.

But Tria, who is party-independent, and his League party deputy Giancarlo Giorgetti, hinted yesterday that they would be open to abolishing the Renzi bonus and raising VAT in order to fund other tax cuts and safeguard the government's finances, signalling a rift within the party, reports La Stampa.

Giorgetti also pointed out that the EU could ask the government to increase its indirect taxation.

Salvini, an outspoken eurosceptic, told reporters last month that he would disregard EU deficit restrictions if he felt it was for the good of Italians.

The “Renzi bonus” was pushed through by then-premier Matteo Renzi in 2015 against strong resistance from his opponents and came into effect in 2016, but ultimately failed to win him favour with Italian voters.

Although the country’s current leaders have little love for their Democratic Party predecessor and his initiatives, they are well aware that it would be an unpopular move to take away 80 euros a month from the 11 million or so voters estimated to be beneficiaries of the system.

Renzi, whose policies have been repeatedly attacked by Salvini, has met the news of Salvini's position with apparent schadenfraude.

“Today Salvini defends #80euro […] They say: “Renzi has a bad character”. Better to be disliked and do useful things than to wisecrack: time's a gentleman”, reads a tweet currently pinned to his Twitter profile.