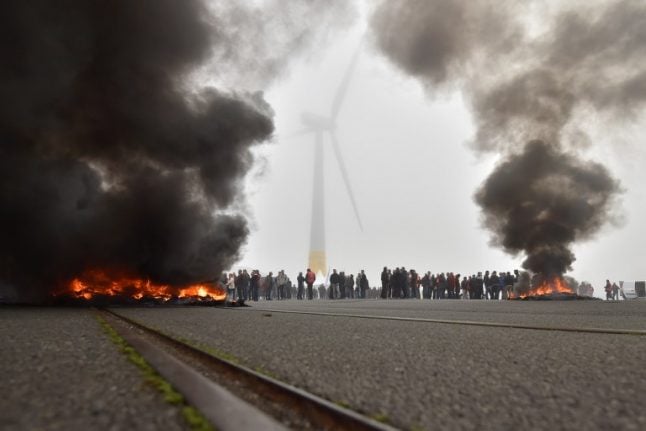 Dockers burn tires to protest labour law and ecologic reforms, on the sidelines of the inauguration of the first French offshore wind turbine (western France). Photos: AFP
France gets most of its energy from nuclear power, and resistance to wind power has been long standing.
But in recent years, those campaigning against this clean source of energy have become much more diverse.
While these opponents all share wind farms as a common enemy, their grudges couldn't be further apart.
“From bourgeois people to militants of the far-left, anarchists, fishermen and rich landowners, opposition against wind power has become much more ecclectic,” wrote Le Figaro. “What do these opponents have against wind power? There's the fact that it is ugly, its proximity to people's houses and historical monuments, the noise, the' blinding' lights and the risk of corruption and conflict of interest on the part of politicians involved,” the newspaper explained.
France is Europe's fourth biggest wind power producer, but nuclear power accounts for 75 per cent of the country's electricity needs.
Six years ago, in the wake of the Fukushima nuclear disaster, the government pledged to reduced France's dependence on nuclear to 50 percent by 2025.
But that deadline keeps being pushed back because of an insufficient renewable capacity, and using more fossil fuels goes against France's climate change targets. French Environment Minister Nicolas Hulot stands on top of a wind turbine. Photo: AFP
Setting up wind farms in France requires patience.
Despite the fact that polls show the French are overall in favour of wind power – an industry that currently provides 10,000 jobs in France – it can take up to nine years to get a project up and running.
That's more than double the time it takes in Germany, Europe's leading wind power-producing nation, where it takes only four years.
Traditionally, France's long-running opposition to wind power in France stemmed mainly from local activists and residents – who feared wind turbines would ruin the landscape, decrease the value of their house or have damaging side effects on their health – and pro-nuclear groups, who didn't want competition from another source of power. Some environmentalists also worried about the impact of turbines on wildlife.
Nowadays, mainstream politicians have also jumped into the fore.
In a column published a few weeks ago in Le Figaro newspaper, 10 MPs from both the ruling party and the opposition asked the governmnent to halt all plans for onshore and some offshore wind farms near the coast.
“France is currently going through a real crisis in terms of the setting up of new wind farms,” the politicians wrote.
“As representatives of the people, we have seen how angry people get when plans to build wind farms on land or by the sea are mooted. The social acceptance level is so low that appeals are lodged against 70 per cent of them”.
That figure is up from 50 percent five years ago.
Dealing with legal objections is a major hurdle for wind farm developers. Members of an association of residents in Montagne-Fayel (northern France) protest against a wind farm project in their immediate living area. Photo: AFP
Over the past two years, activists fearing damage to the landscape filed legal objections which blocked wind farms near historic sites such as Mont Saint Michel in Normandy. An energy company was also forced to abandon a project near a World War One battlefield.
And then there are other, less obvious, reasons for protest.
In early June, explosives were found in a wind turbine in Eastern France days after another in the same wind farm was completely destroyed by a fire.
Responsibility for the attack was claimed by a libertarian organisation which said it was fighting against 'dominations', Ouest France reported.
Despite such fierce opposition, France still intends to go ahead with its plans to increase wind in its energy mix.
At the end of June, Emmanuel Macron announced that six offshore wind farms had been given the go ahead, and are set to be switched on from 2021.