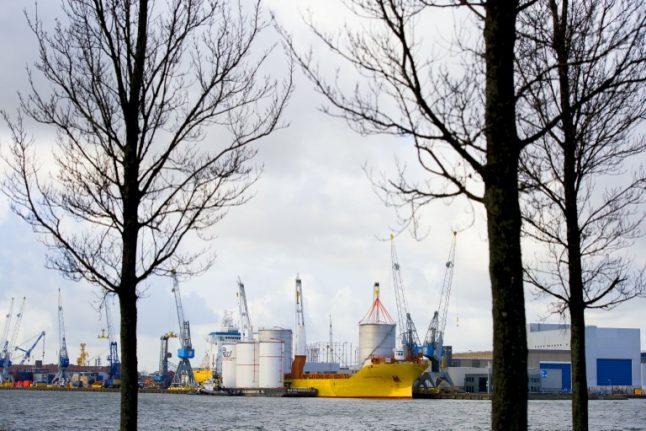 The Port of Rotterdam has expressed fears about Brexit. Photo: Robin Utrecht/ANP/AFP.

“A week is a long time in politics,” Harold Wilson once famously proclaimed. the Netherland’s PM Mark Rutte doesn’t seem to agree.

“I am not losing patience,” PM Rutte said of the Brexit negotiations in June. “But time is getting shorter and shorter to reach a deal,” he added, echoing a widely-held view among his European counterparts.

The Netherlands is one of the UK’s closest allies in the EU but the UK’s divorce from the bloc has left a spectre looming over the North Sea and the NL-UK bilateral trade relationship.

Prognostications vary as to how the Dutch economy will be affected by Brexit, yet most are pretty grim.

The Dutch government predicts that the UK’s exit will strip 1.2 per cent off the Netherlands’ GDP by 2030, a loss of €10 billion, with a net cost of €575 per Dutch citizen.

An analysis by Rabobank suggests it will be more like a 4 per cent impact on GDP, in the event of a no deal Brexit.

Regardless of how the Brexit negotiations unfold in the next few months, the Dutch government is already taking steps to inaugurate the new status quo with the UK.

Between 750 and 900 new customs officers have been hired to accommodate Brexit – the port of Rotterdam is one of the most important commercial transit hubs for goods in Europe.

Given that it takes two to three years to train new officers, such forward planning is seen as necessary in ‘any deal’ scenario. The problem, says one expert, is whether the UK will reciprocate such forward-thinking.

“A border has two sides,” Rem Korteweg, head of the ‘Europe in the World’ unit at Dutch think tank Clingendael, told The Local in an exclusive interview.

“It takes two to tango to avoid friction,” he added, noting that Dutch business leaders he has been in contact with fear that the UK is not as prepared as it should be for the customs scenarios post-Brexit.

A joint study commissioned by the Dutch Ministry of Economic Affairs and Economic Policy and the Ministry of Agriculture, Nature and Food Quality – and authored by KPMG – estimates that customs formalities for import and export of goods between the Netherlands and the UK after Brexit will amount to between €387.2 million and €627.4 million per year (excluding any eventual tariffs).

The same study estimates that after Brexit, Dutch customs authorities will face an increase of 752.00 entries at import and 4.2 million advance customs declarations. Each customs declaration for a single transfer is likely to cost a company between €78 and €120 on  average, states the same report (in Dutch).

The Dutch sectors that are most worried about Brexit are the ones that are time-constrained, says Korteweg. “Agro-foods, flowers and fresh produce will feel the heat,” the analyst told The Local. Time-consuming procedures at customs hubs, new tariffs and taxes mean that many products would spoil before reaching their intended market in the UK.

“The fisheries sector is also worried about being cut out of UK waters,” says Korteweg.

“In 2015, the total value of the Dutch fishermen’s catch from the UK fishing grounds accounted for 39% of the total Dutch landings – by volume it amounts to up to 60%,” states a report by Rabobank on how Brexit could affect European fishing vessels.

The Dutch fishing industry is hoping Michel Barnier’s former role as Minister for Agriculture and Fisheries in France could help secure a deal in this sector.

The UK, however, continues to insist it will pull out of the London Fisheries Convention of 1964, which gives North Sea nations access to UK territorial waters.

Dutch pension funds are set to suffer too as a consequence of Brexit because they are “heavily exposed to the UK economy,” according to Korteweg.

Financial services firms are also worried about access to UK capital markets and their ability to attract financing from
the UK in the future, adds the analyst. The Netherlands has welcomed nearly two dozen Brexit-relocated companies in the last year. But it was Unilever’s choice to opt for Rotterdam rather than London as its unique HQ this year that showed the extent to which Brussel’s regulatory framework continues to define the choices of major multinationals caught in Brexit uncertainty.

“There is an open question about what Royal Dutch Shell might do too,” says Korteweg, although he expects that the Dutch-British energy giant will opt to remain in the UK.

“Unilever is considered a Dutch crown jewel (ED: current Dutch PM Mark Rutte began his career there) and is dependent on regulation from Brussels,” explains Korteweg, who suggests the relocation to Rotterdam did not come as a surprise to Dutch insiders.

The UK’s choice to leave the bloc has left a void and strengthened Franco-German predominance within the EU, argues Korteweg.

“The UK leaving the EU is a net loss for how the Netherlands gets across its message,” Rem Korteweg told The Local. Besides similarities on regulation, the services landscape and a strong trade relationship – the UK is the Netherland’s third largest export partner – the UK’s departure has stripped the Netherlands of a powerful, anti-federalist and pro-trade political ally in the bloc.

“Sweden, Denmark, Ireland and the Netherlands tended to congregate around London on these issues,” says Korteweg.
The UK’s exit has pushed the Netherlands to “flirt” with Austria, Spain and even the Vysegrád Group – Czech Republic, Poland, Slovakia and Hungary – even if the historically liberal country does not see eye to eye with many of those four countries on issues of the rule of law.

Korteweg, however, estimates that it would take 13 countries to block a Franco-German proposal using the Qualified Majority Voting (QMV) mechanism in the European Council, something that is extremely hard to organize. A blocking minority must represent at least 35 per cent of the EU population.

With key differences of opinion on federalism, free trade and the awarding of greater powers to Brussels, the Netherlands is nevertheless forced to expand its EU horizons to maintain its political and economic identity.

A no deal Brexit would only add to the uncertainty. But it’s not all doom and gloom for the Netherlands vis-a-vis Brexit. Amsterdam was awarded the European Medicines Agency (EMA) in 2017, which will relocate from the UK because of Brexit. The EMA’s presence could help strengthen the city’s pharma industry.

“It’s a fair bet that some pharmaceutical firms will put part of their business near the EMA,” Korteweg told The Local.