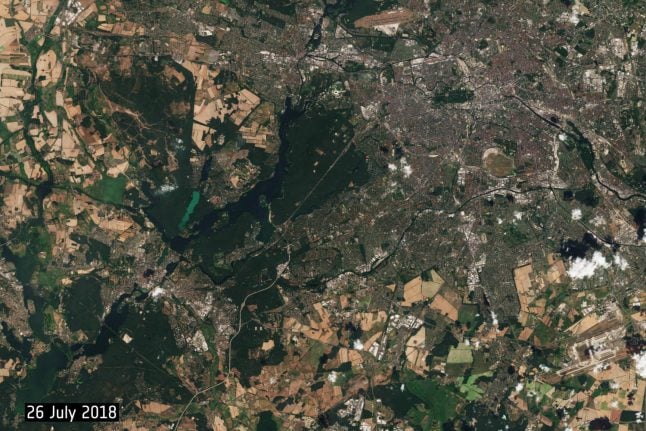 The photos, taken 800 kilometres above ground by the satellite Copernicus Sentinel 2, lay bare the devastating effects of the hot, dry weather.

Compared to equivalent images taken in July last year (see below), vast swathes of the natural landscape around the German capital have been transformed from luscious green to sandy brown, as the scorching summer roasts the fields and forests of Berlin and Brandenburg.

In both images some fields are brown, due to the fact that the crop in them is wheat. But the fallow fields in the 2018 picture are starkly brown in comparison with the green of last year. Photos from this July and July 2017 show the devastating effects of this year's heatwave. Photo: Copernicus Sentinel/ESA/dpa

According to the ESA, the two Copernicus Sentinel 2 satellites are tasked with monitoring vegetation, plant growth and forests.

Temperatures continue to exceed 30 degrees across Germany this week. Concerns are growing over the effects on agriculture, while last week, an enormous forest fire broke out near Potsdam, around 30 kilometres south of Berlin.