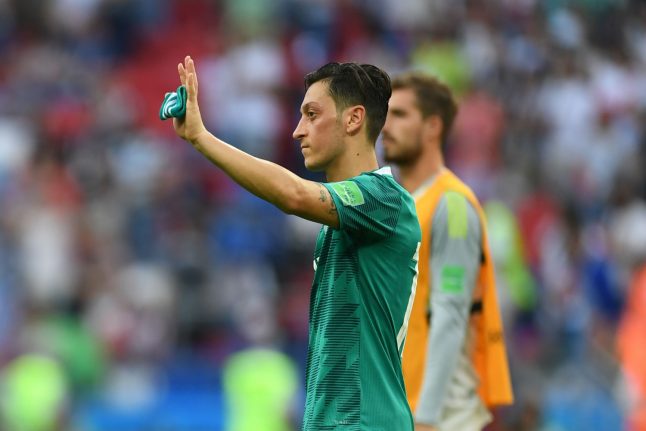 Özil at the Kasan Arena on June 27th. Photo: DPA

Özil, who has Turkish roots but was born in Germany, had been under fire since posing for a controversial photograph with Turkish President Recep Tayyip Erdogan in May which sparked questions about his loyalty to Germany's squad ahead of the tournament in Russia.

“It is with a heavy heart and after much consideration that because of recent events, I will no longer be playing for Germany at international level whilst I have this feeling of racism and disrespect,” he said in a statement on social media channels on Sunday.

Özil, 29, said he had been unfairly blamed in Germany for the side's shock group stage exit at the World Cup.

He insisted he was true to both his Turkish and German origins and did not intend to make a political statement by appearing with Erdogan a month ahead of elections in Turkey.

“I have two hearts, one German and one Turkish,” said Özil in a statement released in English on Twitter.

The past couple of weeks have given me time to reflect, and time to think over the events of the last few months. Consequently, I want to share my thoughts and feelings about what has happened. pic.twitter.com/WpWrlHxx74

The Turkish government of Erdogan, who has championed a campaign against what Ankara sees as growing Islamophobia in Europe, hailed Özil's move.

“I congratulate Mesut Özil who by leaving the national team has scored the most beautiful goal against the virus of fascism,” Justice Minister Abdulhamit Gul wrote on Twitter.

Turkey's Sports Minister Mehmet Kasapoglu, like Gul posting the picture of a smiling Özil with Erdogan, added: “We sincerely support the honourable stance that our brother Mesut Özil has taken”.

“The chancellor values Mesut Ozil highly. He is a footballer who has contributed a great deal to the national team,” said Ulrike Demmer, adding that he has “now made a decision that must be respected.”

Immigrant when we lose

The Arsenal midfielder blamed the German Football Federation (DFB) for failing to defend him against his most strident critics, lashing out at “mistreatment” in particular from DFB President Reinhard Grindel.

He said that Grindel and Germany coach Joachim Loew had asked him to give a “joint statement to end all the talk and set the record straight” over the picture with Erdogan.

“Whilst I attempted to explain to Grindel my heritage, ancestry and therefore reasoning behind the photo, he was far more interested in speaking about his own political views and belittling my opinion.”

“I will no longer stand for being a scapegoat for his (Grindel's) incompetence and inability to do his job properly,” he said.

“In the eyes of Grindel and his supporters, I am German when we win, but I am an immigrant when we lose.”

Fellow German international Ilkay Gundogan, born in Germany to Turkish parents, was also present at the London meeting with Erdogan in May on the president's visit to Britain, as well as striker Cenk Tosun of Everton who was born in Germany but represents Turkey.

The photo, which was published on the presidential website and the Twitter feed of the ruling party, came just before the June 24 polls Erdogan won to claim sweeping new powers.

Özil said that despite the timing of the picture “it wasn't about politics or elections, it was about me respecting the highest office of my family's country”.

“My job is a football player and not a politician, and our meeting was not an endorsement of any policies,” Özil added.

Germany is home to more than three million people of Turkish origin. Manchester City midfielder Gundogan presented Erdogan with a signed club shirt on which he had written “to my president”.

The two players were booed by German fans in pre-World Cup friendlies over their appearance with the Turkish strongman, and Özil said Sunday that he and his family had received threats.

Özil said he could abide criticism of his performance on the pitch but not when it was linked to his ethnic background.

“If a newspaper or pundit finds fault in a game I play in, then I can accept this,” he said.

“But what I can't accept are German media outlets repeatedly blaming my dual-heritage and a simple picture for a bad World Cup on behalf of an entire squad,” he added, calling it “right-wing propaganda”.

“This crosses a personal line that should never be crossed, as newspapers try to turn the nation of Germany against me.”

He also furiously denounced disparaging remarks by former captain Lothar Matthaeus, who he noted “met with another world leader a few days back and received almost no media criticism” in an apparent reference to an appearance with Russian President Vladimir Putin.

Cem Özdemir of the Greens party also voiced dismay that “young German-Turks now get the impression that they have no place in the German national team”.

At the same time, Özdemir, who himself has Turkish roots, voiced disappointment that Özil “did not live up to his function of setting examples” by failing to distance himself from Erdogan.

“Posing with the sole ruler Erdogan is disrespectful to those who are being persecuted in Turkey or put arbitrarily in prison,” he said.

Germany's country's best-selling newspaper Bild led the charge of criticism against Özil, calling his statement a “whiny resignation” and slamming him for heaping “criticism on everyone but himself”.

Bild, which has for weeks has been calling for Özil to be dropped from the starting team, also hit back against the midfielder's claims that his Turkish origin and Erdogan photo have been used by some media to pander to the far-right.

“Özil's world view here is dangerously close to Erdogan and his despots,” charged the tabloid-style daily.

The photo, which was published on the presidential website and the Twitter feed of the ruling party, came just before the June 24 polls Erdogan won to claim sweeping new powers.

Ozil said that despite the timing of the picture “it wasn't about politics or elections, it was about me respecting the highest office of my family's country”.

Born and raised in Gelsenkirchen, Özil, who has scored 23 goals and made 40 assists in 92 appearances for Germany, is third-generation German-Turk and counts among more than three million people of Turkish origin in Germany.

In his statement, Özil underlined how he felt “hurt” by his school which he said did not want him to appear in an event there because of the raging criticism against him over the Erdogan affair.

The DFB has so far stayed mum, and in a first reaction from his former teammates, defender Jerome Boateng wrote on Twitter only using the Turkish word for “brother”: “It was a pleasure, Abi.”

Former DFB chief Theo Zwanziger warned that the debacle was a “serious blow to the integration efforts in our country that goes beyond football”.

For Tagesspiegel, the entire affair was a “watershed for sports, politics and society.”

While the newspaper noted that Özil's thinking that a photograph could be non-political was “naive”, it said that the debacle had far reaching consequences.

“Ultimately, Özil did not fall because of Grindel but because of a heated, populist mood in Germany,” it said.

“The danger exists because many who also have family roots in other countries or culture, can understand Özil's mood. And this needs to be countered quickly and decisively.

“Because more is at stake than just the future of the German national football team.”