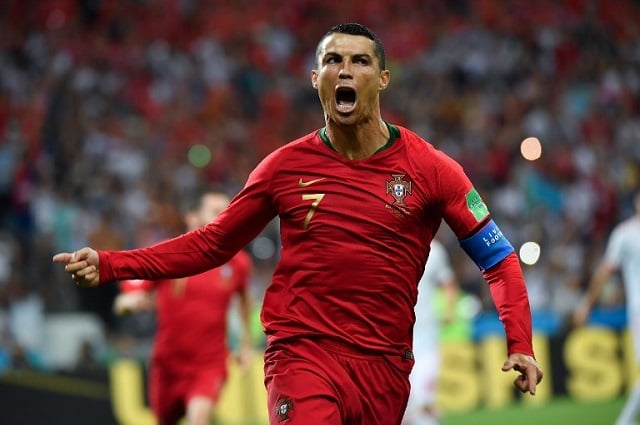 Juventus shirts emblazoned with “Ronaldo” and the number 7 have been selling like hotcakes, while 5,000 shopkeepers in the north-western city are putting up posters that read “Bem-vindo!” — welcome in Portuguese.

One ice-cream parlour in Turin has even invented a “CR7” cone, featuring a Portuguese cherry liquor and chocolate shavings.

“The wait is over”, wrote major sports daily the Gazzetta Dello Sport on Sunday ahead of the 100 million-euro man's presentation as a Juve player to the world's media at 1630 GMT — set to be a more sober affair than the one initially expected.

After confirmation of the blockbuster signing, reports circulated of a Hollywood-style welcome in front of a packed-out Allianz Stadium throbbing with lights and noise. Instead the five-time Ballon d'Or winner will take part in a more low-key event after surprising everyone by arriving in Turin on Sunday afternoon instead of Monday morning. Ronaldo will complete his medical at the club's stadium complex on Monday before facing journalists' questions at a media conference. Ronaldo is then due to jet back off to finish his holidays.

La Repubblica reports that he will meet the team — who have begun pre-season training — on Monday, but will not join them officially until later in the month when they begin their summer tour of the United States.

Such has been the demand from international media that Juve have had to move the presentation to the hall they usually reserve for their shareholders meetings, and the more sober introduction has done nothing to dampen the fans' desire to catch a glimpse of their new star.

La Repubblica said that as many as 20,000 supporters would have greeted Ronaldo at the airport, before the attacker dropped his shoulder and swerved the crowds by arriving early.

Juventus are hoping that Ronaldo's arrival will push them onto Europe's top table. Fresh from their seventh Serie A title in as many years and four straight domestic doubles, the Old Lady of Italian football have struggled to turn domestic dominance into European success as they strive for the continent's holy grail — the Champions League. A boy, wearing a Cristiano Ronaldo's Juventus jersey, plays with a ball in front of the Juventus Stadium in Turin. Photo: Miguel Medina/AFP

Over the course of Ronaldo's four-year contract Juve will reportedly spend 350 million euros ($409 million), a huge investment made after years of steady financial management that they hope will reap dividends at the highest level.

Ronaldo has scored 120 Champions League goals, more than anyone else in the history of the competition, and won four out of the last five editions with Real.

Juve haven't won the competition since 1996 but reached the final in 2015 and 2017, where they were bested respectively by Barcelona and Ronaldo's former club Real Madrid.

Massimiliano Allegri's side were effectively knocked out of the Champions League by Ronaldo in the last two seasons, with the Portuguese scoring a brace in the 2017 final and slotting home the controversial stoppage-time penalty that thwarted an incredible Juve comeback from three goals down and saw them exit at the quarter-final stage.

That's without forgetting the double he bagged in the first leg as Madrid ran out 3-0 winners in Turin — which included an incredible scissor kick that led to the Allianz Stadium rising to its feet in appreciation.

“I say this as a fan, Cristiano Ronaldo is an incredible signing,” Juventus midfielder Claudio Marchisio said on Instagram on Wednesday.

Ronaldo's signing is also an attempt to boost the club's brand globally and push them alongside the La Liga giants.

At a meeting last year Juve president Andrea Agnelli outlined his strategy by saying that he wanted the club — who lag way behind seven-time European champions AC Milan in continental trophies — to become more “pop”, and to point towards people who weren't classic football fans.

“We have to ask ourselves: What is the little girl in Shanghai and the millennial in Mexico City thinking?” he said at the time.

READ ALSO: How the Juventus women's team is shaking up Italian football