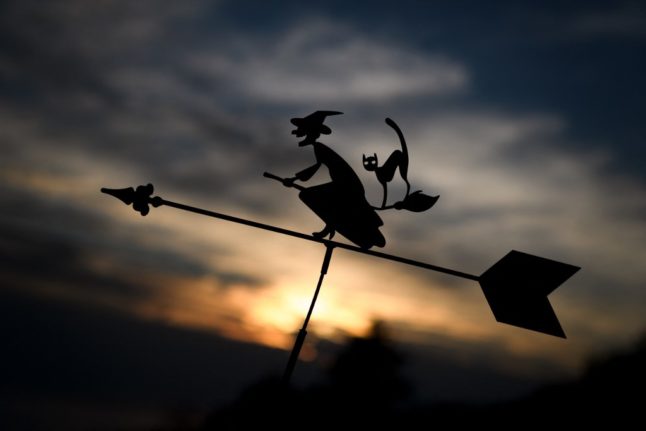 Has a black cat crossed your path today? Photo by Fabrice COFFRINI / AFP

But there are plenty of other French superstitions – here is a selection of our favourites;

Just like how some people think its bad luck to be hit by bird droppings, the French have their own animal faeces-related irrational belief.

Theirs is that if you step in dog poo with your left foot, it brings you a slice of good luck. However if it’s the right, you’re doomed.

In good news, Parisians’ famed reluctance to pick up after their pets means that if you’re in the capital there is a good chance of getting some ‘luck’ this way.

Never have 13 to a dinner table

Although Friday the 13th is not unlucky, a strong French superstition says that having 13 people around the dinner table is going to bring some ill wind your way.

This superstition is believed to have come from the Last Supper, where one of the 13 diners – Judas Iscariot – ended up being a traitor. French waiters will apparently sometimes add an egg to the table to mark a 14th “dinner guest” to fend off the bad luck.

Never use the same match on three cigarettes

Lighting three cigarettes with the same match is said to bring bad luck. This superstition – which is popular elsewhere in the west – is thought to stem from the trenches of World War I when snipers were said to have a better hit rate when smokers took so long holding one match up.

The first cigarette alerts the sniper, the second allows him time to take aim, leaving the third smoker dead on their feet. You’ve been warned (and this isn’t the only health risk associated with smoking, of course).

Never give a knife as a gift

So if you’re desperate to present your ami with a famous Laguiole blade, then make him hand over ten centimes for it. The payment would apparently break the superstition and you two can carry on being chums.

Never leave your bread upside down

You need to know how to handle your bread in France if you want to avoid bad luck. Never place a baguette or a loaf of bread on a table upside down.

If you do, then you and the people it’s for risk being struck down with a hunger curse. According to folklore this superstition stems from the days of executioners, when they were apparently allowed to grab things in shops without paying. Hence bakers would leave a loaf of bread upside down for them.

READ ALSO Baguettiquette: Weird things the French do with bread

Candles are involved in a few superstitions in France.

Firstly, if you light a prayer candle in a church always do it from a match or a lighter and never from another candle. If you do, then your wishes and will be transferred to whoever the first candle was lit for.

Secondly, when it comes to smoking, never light a cigarette from a candle, because the old wives’ tale says this will result in the death of a sailor, or he will at least lose his job.

Seek an owl if you want a baby girl

If you have a three sons and are desperate for a girl then it’s perhaps a good idea to head down to the local aviary and try to get a glimpse of an owl. According to a French superstition, if a woman sees an owl during the nine months when she is pregnant, then she is guaranteed to have a girl.

Keep your horse shoes upside down

Hanging a horse shoe outside your door can bring you luck in France, if you do it the French way that is. In some countries it has to be the right way way up, in order to keep the luck inside, but in France it is upside down.

There are numerous superstitions focused on cats in France. So if you believe in luck and wouldn’t mind some good fortune, then never cross a French stream holding a cat (in case you are in some incredibly unlikely scenario where that might be necessary).

Also, if a black cat crosses your path at night then prepare for some bad fortune coming your way. And perhaps the most peculiar and worrying French superstition with cats, which only affects people in Normandy, is if you ever see a tortoiseshell cat, then this foretells your death in an accident.

Be careful when ironing underwear

And here comes the most ridiculous of them all: Wives should never iron their husbands’ underpants whilst wearing a belt – it will lead to him suffering kidney pain.

(We would say that it’s pretty unlucky to end up married to a man who a) thinks underpants need ironing and b) expects you to do it).

And if you’re looking for some good luck, wear a polka dot dress on New Year’s Day, or bring a table into a new home before the rest of the furniture, or twiddle the red bobble on top of a sailor’s hat.