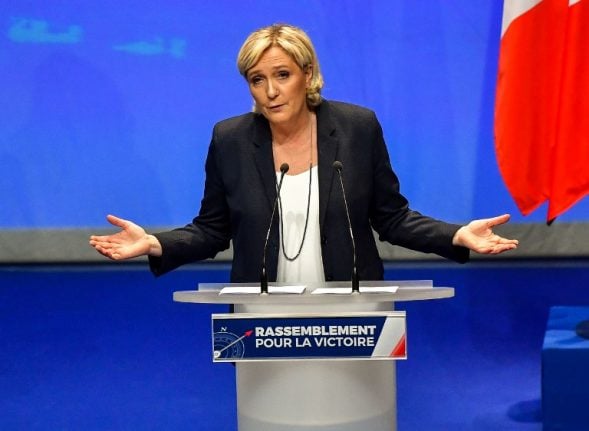 Party leader Marine Le Pen called on “those who fight for democracy” to “stand up for their principles” after judges withheld two million euros ($2.4 million) in subsidies granted to French political groupings.

“If tomorrow (far-left party) France Unbowed were in our situation, I would come to their defence,” Le Pen told BFM television.

She and other National Rally lawmakers are accused of using funds earmarked for parliamentary assistants when they were European Parliament MPs to pay for France-based staff over several years starting in 2009.

On Monday sources close to the inquiry told AFP that four more people had been charged last month.

They include Nicolas Bay, an MEP and top party leader, who was charged with breach of trust, and Le Pen's bodyguard Thierry Legier, who was paid in part with the EU parliament funds.

If convicted the party could be ordered to repay seven million euros.

Sources close to the inquiry say the two investigating judges worry the subsidies will be used instead to repay debts racked up by the party after a
series of recent financial setbacks.

But Le Pen argues that seizing the subsidies before any verdict has been reached is tantamount to a “judicial coup d'etat” that will bankrupt her party
by end-August.

She said the judges' move was “terrifying news for our country which will resonate beyond our borders.”

“What are people going to say about our democracy?”

Officials from several rival parties came to her defence on Monday.

“The principle in a democratic nation is nonetheless to make sure that a seizure doesn't threaten a party's very existence,” Socialist Party leader Olivier Faure told Europe 1 radio.

The party, known until recently as the National Front, has set up a website to collect donations from supporters.

It had expected to touch roughly 4.5 million euros in subsidies this year, proportional to the party's results in recent elections — Le Pen beat out candidates from several rival parties to face off against Emmanuel Macron in last year's presidential vote.

Such subsidies are common in European countries, which see them as a way of ensuring a level playing field while limiting the risks of political corruption or illegal funding.

If convicted, the party could be ordered to repay €7 million ($8.2 million), and the judges pre-emptively seized the subsidies.

An EU tribunal has already determined that Le Pen must reimburse €320,000.

But when police from France's anti-corruption squad tried to question him last month at his office just outside Paris, he claimed MEP immunity and ordered them to leave.

“He was prepared to receive them, but they had such arrogant attitudes which Jean-Marie Le Pen refused to accept,” his adviser Lorrain de Saint Affrique told AFP, confirming a report in the Journal du Dimanche newspaper.

Le Pen, 90, sits as an independent after being thrown out of his party by his daughter Marine Le Pen in 2015 for saying the Nazi gas chambers were a mere “detail” of history.

He has also often made disparaging statements against Muslims and Roma which have earned him a string of hate speech convictions.

His daughter has renamed the party the National Rally in an effort to shed its xenophobic and anti-Semitic image.

The EU funding inquiry has led French judges to withhold €2 million of public subsidies for the party, a move which Marine Le Pen has denounced as a “death sentence”.

Without the funds, she warns the party will be bankrupt by September.