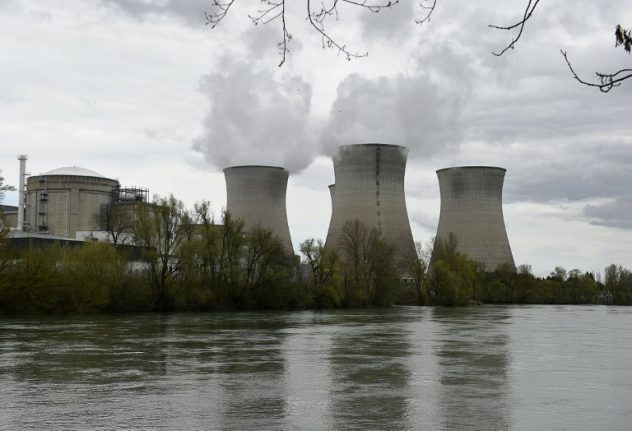 Bugey nuclear power plant. Photo: AFP
“When you look for failings you find them, and some are more concerning than others,” said Barbara Pompili, a lawmaker from the governing Republic on the Move party.
France is the world's most nuclear-dependent country, with 58 reactors providing 75 percent of its electricity.
Environmentalist group Greenpeace has carried out a string of break-ins at nuclear facilities in recent years to prove its claim that they are vulnerable to accidents and terror attacks.
In the latest stunt Tuesday, it flew a drone mocked up as Superman into an ageing plant in Bugey, about 25 kilometres (16 miles) outside the southeastern city of Lyon.
READ ALSO: A man carries fake nuclear barrels during a demonstration to demand the closure of Fessenheim nuclear power plant in eastern France. Photo: AFP
The drone crashed into a building housing a storage pool for spent nuclear fuel, one of the most radioactive areas at the site.
The cross-party commission tasked with looking into nuclear safety spent five months interviewing experts and visiting facilities, including in Japan where they reviewed measures taken after the 2011 meltdown at the Fukushima nuclear plant.
The lawmakers said the number of safety incidents in France “has risen steadily”.
They cited in particular last year's temporary shutdown of the four reactors at a plant in Tricastin in the southeast, seen as prone to flooding in the event of an earthquake, and a blast at a facility at Flamanville in the north.
The report recommended 33 steps to improve nuclear safety, including boosting police numbers at atomic plants and reducing the number of subcontractors in the industry.
'We cannot verify'
President Emmanuel Macron has been noncommittal about a pledge by his Socialist predecessor Francois Hollande to drastically reduce the share of nuclear power in France's energy mix.
Environment Minister Nicolas Hulot said in November that meeting Hollande's targets would be “difficult” and that a rushed move to bolster the share of renewables could jeopardise power supplies.
Anti-nuclear campaigners argue that older plants, like the 39-year-old Bugey facility, were not built to withstand an attack from the likes of the Islamic State group or Al-Qaeda. Photo: AFP
Greenpeace has said the pools for storing spent fuel are particularly vulnerable.
The parliamentary report demanded that the government provide a timetable for dismantling older plants.
It also questioned the safety of a plan to store nuclear waste deep underground in the northeastern village of Bure and called for the number of subcontractors in the nuclear industry to be kept to a minimum, “to improve control over the operation of the sites”.
State energy utility EDF said the report contained “a number of errors” and said it would respond by mid-July.
The MPs for their part complained that many of the questions they put to the state and EDF went unanswered, with both invoking national security concerns.
“We have the feeling that a lot of work is being done to protect the plants but we cannot verify it,” Pompili said.

EDF said it had disconnected one of two reactors at Fessenheim, along the Rhine near France's eastern border with Germany and Switzerland, at 2:00 am (0100 GMT) in the first stage of the complete closure of the plant.

The second reactor is to be taken off line on June 30 but it will be several months before the two have cooled enough and the used fuel can start to be removed.

The removal of the fuel is expected to be completed by the summer of 2023 but the plant will only be fully decommissioned by 2040 at the earliest.

Shutting down Fessenheim became a key goal of anti-nuclear campaigners after the catastrophic meltdown at Fukushima in Japan in 2011.

Experts have noted that construction and safety standards at Fessenheim, brought online in 1977, fall far short of those at Fukushima, with some warning that seismic and flooding risks in the Alsace region had been underestimated.

Despite a pledge by ex-president Francois Hollande just months after Fukushima to close the plant, it was not until 2018 that President Emmanuel Macron's government gave the final green light.

France will still be left with 56 pressurised water reactors at 18 nuclear power plants — only the United States has more reactors, at 98 — generating an unmatched 70 percent of its electricity needs.

The government confirmed in January that it aims to shut down 12 more reactors nearing or exceeding their original 40-year age limit by 2035, when nuclear power should represent just 50 percent of France's energy mix.

But at the same time, EDF is racing to get its first next-generation reactor running at its Flamanville plant in 2022 — 10 years behind schedule —  and more may be in the pipeline.