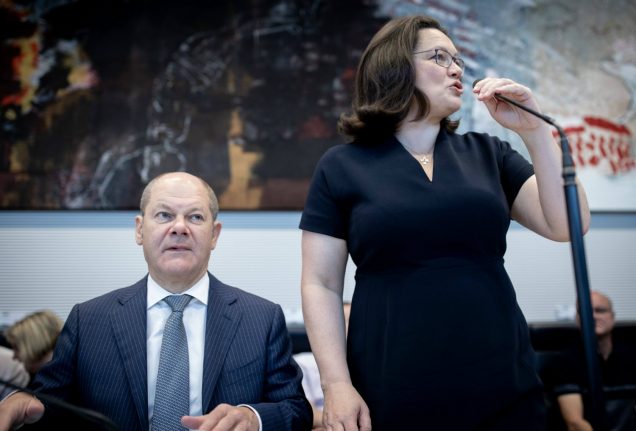 Foreign Minister Heiko Maas stands jammed in the elevator at 7.25 am on Wednesday morning in the Bundestag. The next emergency meeting of the Social Democrat (SPD) faction is imminent. The lift is tightly packed.

“It’s like a closed transit centre in here” one woman jokes. “But there’s not even an alternative to leave to Austria”.

Martin Schulz, leader of the SPD before their election collapse last year, grins. Foreign Minister Maas, on the other hand, doesn’t react. The situation is serious – and anger is growing inside the centre-left coalition partner.

On Monday, after weeks of bitter conflict, the other two parties in government – Angela Merkel's CDU and the Bavarian CSU – found a compromise deal on asylum seekers crossing the border. But the deal, based around building transit centres at the Austrian border, was struck without regard for the concerns of the SPD.

Wednesday morning's meeting is the second time this week that the 153 SPD parliamentarians have gathered for an emergency meeting. Many in the SPD are upset that they are expected to sign off on a solution that few of them actually believe in, just for the sake of peace between their conservative coalition partners.

Why, SPD MPs are asking, should they steady the ship just so that CSU leader and Interior Minister Horst Seehofer gets his way?

The centre-left party face a dilemma: save the coalition for the sake of stability, or refuse to sign off on a policy that Schulz describes as “bonkers.”

Hundreds of politicians and their staff have been dragged in to flesh out the compromise between Merkel and Seehofer into a practical concept for a faster return of some asylum seekers at three border crossings between Germany and Austria. And all this over a number of refugee arrivals which is “peanuts,” says Schulz.

The former SPD leader says that it's irresponsible to waste days on end on migration while the head of the World Trade Organization is warning of a 60 percent slump in global trade due to the trade conflicts instigated by US President Donald Trump. A looming trade war is the real problem for export-dependent Germany, Schulz declares.

According to the SPD, a maximum of ten migrants and refugees who've already been registered in other EU countries are entering Germany at Bavarian border crossings at the moment. If the transit centres exist, migrants would move to other border crossings, the party claims.

The planned transit centres in Bavaria are the key point in the CDU/CSU concept. Asylum seekers who were previously registered with fingerprints in other EU states would be intercepted and sent back to that state, where (according to the EU's Dublin rules) they are supposed to apply for asylum.

But the SPD have also expressed concern that the centres would turn into detention camps.

“There will be no closed camps with us,” SPD leader Andrea Nahles said on Tuesday.

The CDU/CSU argue that the centres will not be completely closed – people will be free to leave them and go back to Austria. According to paragraph 18a of the Asylum Act, the so-called airport procedure is to be applied. People will be detained if they don't have any valid papers.

“There is no detention, nor is there talk of barbed wire or the like. This is a stay that can last no longer than 48 hours according to our constitution,” Seehofer told broadcaster N-TV on Wednesday.

Seehofer appears to have been referring to the fact that paragraph 18a states that entry must be permitted at the airport if an application for asylum has not been decided within two days.

But the deal also depends on the willingness of other EU states to take people back. Furthermore, it needs Austria's consent – and contrary to the hopes of the CSU, Austrian Chancellor Sebastian Kurz has so far been anything but happy about the proposal. Ironically, Seehofer has been tasked by Merkel with negotiating an agreement with Vienna.

The SPD are also deeply divided – at the grassroots level many are more in favour of the CSU line and are calling for a tightening of asylum policy. At the same time, Nahles and Vice-Chancellor Olaf Scholz face a hot summer from liberal journalists if they simply acquiesce to the CDU/CSU compromise.

On Thursday evening, Merkel and Seehofer will meet the SPD leadership to try and convince them of the merits of the transit centres.

Nahles actually wanted to start her vacation at the end of the week. But she is facing growing pressure to be tough – after all, the CDU and CSU have agreed something that is not in the coalition agreement.

Whether she takes a break or not, the coalition is facing turbulent times.

“They will pay a high price for their attack on democracy,” predicted SPD treasurer Dietmar Nietan. The CSU have blackmailed Merkel “for three points in a paper that will not bring a solution,” he said.